The Sherlock Holmes stories were what got me into reading crime fiction, when I was at university, but I haven’t really returned to them since then. Prior to this review I had read all of the short stories, but had only read two of the four Holmes novels. Aside from not having read The Valley of Fear (1915), I also hadn’t read The Hound of the Baskervilles (1902). The first of these has never seemed to have been a favourite for Holmes fans, but since last year I have been interested in giving it a go, due to Zach Dundas suggestion, (in his book The Great Detective: The Amazing Rise and Immortal Life of Sherlock Holmes (2015)), that it is a ‘prototype’ text for the country house mystery novel.

But first a reminder of what the book is about. Although published within 1914, it is set much further back into the past, as Moriarty is still alive and kicking. Within a few pages of the book Holmes and Watson are already on their way to the countryside, to Birlstone Manor, with its owner John Douglas supposedly having been murdered in horrific way. What initially interests Holmes the most is that prior to being told of the murder he had managed to decode a message sent to him by one of Moriarty’s subordinates, foretelling the danger Douglas was in. The murder happened late one night, with a friend and guest of Douglas’, Cecil James Barker, finding the body soon after gunshots are heard. He is followed by the butler, housekeeper and Douglas’ much younger wife. The manor is surrounded by a moat and its’ drawbridge is drawn up every evening, an aspect which begins to turn attention towards those inside the house, though there is a reasonably strong theory that the killer was an outsider, an American from Douglas’ past seeking revenge. The solution to this unusually arrives at the half way mark, revealing an unexpected twist which I quite enjoyed. As with A Study in Scarlet (1887) the second half of the story is a substantial flashback, narrating the events which led up to the violence of the first half.

On seeing the publication date of 1914, my mind immediately jumped back a year to 1913, the year in which E C Bentley’s Trent’s Last Case was published. I don’t know whether Doyle was aware of this novel but it is interesting to compare the two, especially since Bentley’s novel is another prototype country house mystery novel. Like the financier and murder victim, Sigsbee Manderson, John Douglas is an American businessman who has come to England to live and both men are married to women much younger than themselves. Equally there is a suggestion in both cases that they had made enemies in their past. In quite a number of country house mystery novels the police have to consider the theory of someone coming from America to wreak vengeance on someone, such as Michael Innes A Night of Errors (1947) and Robin Forsythe’s Missing or Murdered (1929).

But just on focusing on The Valley of Fear itself, I think there are a number of features which validate Dundas’ claim for it being a county house mystery novel prototype. Firstly Birlstone Manor is a suitably old country home, with parts dating back to the first Crusades and consequently has architectural features shall we say that add to the complexity of the central mystery – a feature which Catherine Aird (1999) identifies as part of the country house mystery novel subgenre. Aird also suggests that the country house mystery novel has an ‘enclosed milieu’ (Aird, 1999: 94) or a closed set of suspects. Doyle’s novel kind of has this, with the drawbridge which limits who has access to the inside of the manor after sunset. Yet I think readers will quickly see that the suspect list is not as rigidly closed as later country house mystery novels are. The country house mystery novel especially within the HIBK style has a gothic hue to it and the country home becomes a foreboding and frightening place. The buildings’ histories often play into this and I think this aspect can be found in The Valley of Fear with lines such as, ‘And yet those strange, peaked roofs and quaint, overhung gables were a fitting covering to grim and terrible intrigue.’ Aird also mentions the usefulness of servants in providing key information for investigators and the routinized nature of country homes which often aids police working out everyone’s alibis. Again to an extent I think this can be found in Doyle’s story.

Yet what I think limits this novel’s potential for being a country house mystery novel is that firstly the second half of the novel is not set at the house at all and in the first half characters’ movements are not centred on or restricted to the manor. I think this contrasts with setting of later proper country house mysteries, which is ‘cramped and claustrophobic [… with characters] confined to one space with no opportunity to leave or escape’ (Scaggs, 2005: 53). This is especially the case when the country home is snow bound such as in Ngaio Marsh’s Death and the Dancing Footman (1942) or Another Little Christmas Murder (1947) by Lorna Nicholl Morgan. Moreover, because of the elongated flashback in the second half of Doyle’s novel we miss out on the expected intense interviewing of suspects and therefore get to know the suspects and victim much less. Consequently there feels a lack of connection between the John Douglas of the first half of the story and the John Douglas we encountered in the second half. Equally there are only four key suspects who come from within the manor, two of which are servants and are therefore presumed ‘above suspicion’ (Aird, 1999: 94) and for me I thought this was different from later country house mystery novels where there are a greater number of guests or family members, who could have committed the murder (usually of the owner of the country home).

Although by the time this novel was published Doyle had already written three short story collections and three novels featuring Holmes, The Valley of Fear felt a bit retrograded and I think this is due to the similarities it shares with A Study in Scarlet. Aside from the shared flashback device, both stories also include the feature of the crime having been possibly committed by a revengeful person coming from America. A feature to be fair which even crops up in some of the short stories such as ‘The Adventure of the Dancing Men’ (1903). Yet what makes A Study in Scarlet a better read is that we have more time to get to know Holmes and watch his entertaining interactions with Watson. Moreover, the choice of case in this earlier novel fits better with the flashback device, whereas in The Valley of Fear, Holmes’ investigations in the first half of the novel feel a bit truncated. 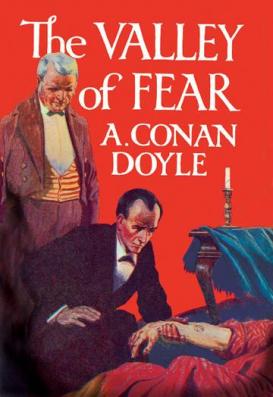 So on the whole this is not Holmes at his best but is still fairly enjoyable. Holmes gets some good lines and Doyle includes a good twist which I didn’t see coming. The unsettled ending is also intriguing, raising questions about on justice and the power of the detective. On balance although The Valley of Fear does contain features which would later be used in the country house mystery novel, I think Bentley’s story is a truer prototype for the subgenre.