Two Bottles of Relish: The Little Tales of Smethers and Other Stories (1952) by Lord Dunsany

Edward Plunkett (1878-1957), the 18th Baron of Dunsany, was a new author to me when starting this book. As well as writing short stories, he also wrote plays, poetry, pieces for the radio and TV, as well as essay and science fiction novels. This short story collection is certainly value for money, including 26 tales and also the original introduction written by Ellery Queen. The majority of these stories are only a handful of pages long, making this book no longer than your average novel. The first 9 stories feature Smethers, a travelling salesman, who sells Numnumo relish and who also shares a flat with an amateur sleuth, named Linley. The remaining stories tend to be standalone ones, though some of the later ones feature Ripley, a retired detective. There are a couple of these stories which I wouldn’t really classify as a mystery (‘The Pirate of the Round Pond’ and ‘In Ravancore’), but the remainder span the mystery genre quite widely. Some have an espionage flavour for instance, whilst others lean more towards the gothic and there of course some more clue focused stories as well.

The titular story, ‘Two Bottles of Relish,’ is definitely the strongest of the collection and is also the sneakiest, placing clues right under the nose of the reader, who if they are me anyways doesn’t realise they are there until the end. Ellery Queen thought it was an ‘unqualified tour de force’ and comments on the publication history of the story in his introduction. Apparently the story came about because Dunsany was ‘amused to notice that people were reading gruesome stories of murder in preference to his own more delicate tales.’ It took a while for the story to be published because it was meant to be so gruesome that no male editor in Britain or America would touch it, saying it ‘made them ill.’ Lady Rhondda seems to have a stronger stomach and published it in 1932. With that kind of introduction I was feeling a bit concerned, being the sort of person who set off a Mexican wave of jumping out of seats while watching Jaws. Yet because times have changed and because the central gruesome thing is only hinted at and not put into words or graphically described, I don’t think this story will make anyone feel ill. This story also sets up Smethers’ friendship with Linley and their first case centres round a woman who has disappeared. The police believe her lodger, Steeger, is responsible for this and have been watching his every move. Yet they cannot find the woman nor prove that Steeger has done anything. This is where Linley comes in, though the ending is not quite what you might expect. One amusing aspect of this story is that the police first become suspicious of Steeger due to his vegetarianism.

The second story, ‘The Shooting of Constable Slugger,’ is a sequel to the first and the case features a blast from the past and yet another murder. Like the first story this one also shows that Dunsany has a creative flair in coming up with ways to bump people off. The case seemingly has an impossible crime, yet due to the brevity of the story this is not fully developed and the final solution will probably be quite familiar to reader.

In the third story, ‘An Enemy of Scotland Yard,’ Linley is called in to help Scotland Yard figure out who sent them a threatening letter which says that if three of their officers go to their usual haunts, such as one who always goes to watch billiards at a certain club, then they will die. Again if this was a full length novel I think it would appeal a lot to readers who love the how of their fictional murders, as Dunsany uses quite unusual methods. There is one aspect of the case which the police are rather slow to pick up on and Linley seems to be a bit late in pointing it out to them. This slowness is a little irritating as it is quite an obvious point and would have solved the case much quicker. However there is an amusing moment when Smethers asks if he should bring a revolver and Linley replies that:

‘That was all very well in the days of Sherlock Holmes, when you could have dragged a small cannon behind you if you had felt that you wanted one. But the world has got more complicated. More licences needed. It was probably a happier world before it learned to fill in forms.’

What else do Smethers and Linley get up to? During WW2 they prevent their nemesis from previous tales from passing on a state secret to the Germans (See ‘The Second Front’) and before the war they also prevent the president of San Paradiso from being assassinated (See ‘The Two Assassins’) and help Scotland Yard track down an infamous spy (See ‘Kriegblut’s Disguise’). ‘The Clue’ was one of the Smethers stories I most enjoyed as it is a beautifully crafted exercise in deduction, based on an unfinished crossword puzzle left by the killer. The final Smethers story, ‘Once too Often,’ once again features Steeger and is a story less to be read for its puzzle solving and more for enjoying the narrative’s journey.

Smethers and Linley definitely fit the great detective and his sidekick formula, with Smethers, our Watson figure, narrating all of Linley’s cases and his assistance in the solving the cases tends to be accidental. Smethers also suffers just a tad from hero worship, seeing himself as infinitely inferior to Linley, such as when he writes in ‘The Two Assassins,’ that ‘‘I don’t know if you will remember me. I have told you one or two tales about Mr Linley. My name is Smethers. Mr Linley is worth remembering; a wonderful brain he has; but you wouldn’t remember me.’ I think the only thing which was consistently lacking in the Smethers stories was that we don’t really know much about him or Linley, especially in regards to their pasts. On the whole I think the more investigation led stories come from these first nine. Some of these I think are quite solvable by the reader, whereas others which are either pure armchair detection, such as ‘The Mug in the Gambling Hell,’ or hinge upon a narrative trick or twist are less feasible for the reader to solve.

The remaining 17 stories are less clue driven and are more crime tales. Some of these are narrated by retired policeman, Ripley, looking back on his careers. His first story, ‘Among the Bean Rows,’ is more of an espionage/undercover story, focused more on action than deduction. Like with Smethers and Linley we don’t really know much about Ripley, though the ending of this story certainly makes you wonder what is lurking beneath the surface. The other two Ripley stories, ‘The Death Watch Beetles’ and ‘Murder by Lightning,’ are reminiscences of past cases, both of which have unusual ways of killing people. As with some of the other stories these two make me wonder what Dunsany would have produced if he had written a full length detective novel. Another policeman narrated story is ‘A Tale of Revenge,’ but it didn’t really work for me as it relied on a plot device which the writer had used before, but in this repeated use of the device Dunsany does not retain the shock of the original. Dunsany also writes a story from the criminal’s point of view called ‘A Victim of Bad Luck,’ which although run along predictable lines is entertainingly written.

There are also a couple of tales where the story is narrated by someone who thinks they have come across a crime but are unsure whether to tell the police, worrying they won’t be believed due to insufficient evidence. The tenth story in the collection, ‘An Alleged Murder,’ is one such tale. It is not particularly mystifying, but its’ character psychology intrigued me, in particular the victim’s. This issue is not overtly explored in the story due to the shortness of it, but the inclusion of the victim’s diary is quite illuminating in an implicit way. ‘The New Master,’ has a similar sort of narrator and the story has a gothic/ H G Wells feel to it. 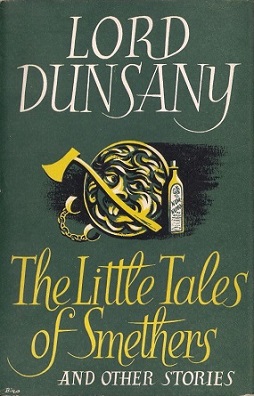 There are also other characters, who not policeman or criminals but who became involved in a criminal case one way or another. Some of these have humorously black twists at the end such as ‘A Trade Dispute,’ ‘The Unwritten Thriller’ and ‘The Speech,’ the latter of which was especially clever. One of my favourite non-Smethers stories is ‘The Waiter’s Story,’ as it has a great twist at the end and again the murder method is sinisterly pleasing. Sometimes though Dunsany’s creativeness doesn’t always work as in ‘A New Murder,’ which begins with Mr Carson telling the police he fears a neighbour will murder them due to a secret he knows about their breakfast product. The story is in keeping with the more clue focused Smethers stories and it does have an unusual murder method. But because the clues are too obviously placed, there is little mystification for the reader. Similarly ‘The Murder in Netherby Gardens,’ is disappointing, not because it has a poor plot but because it has a good premise, yet it is a premise suited to a novel and not a short story. Consequently the story raises your interest and expectations very high, only to plummet them with an open ended ending which doesn’t really satisfy. With several of Dunsany’s stories the ending shows little interest in legal or conventional justice, such as in ‘The Lost Scientist’ and I think this is one of the ways that Dunsany’s stories become quite dark in an understated way.

The final story in the collection, ‘The Shield of Athene,’ made me think of some of Carr’s work in its blurring of the natural and supernatural. It has an amateur sleuth, who has yet to solve a case, but who thinks his luck has finally changed when he takes an interest in a spate of disappearances in Yorkshire and in the work of a new sculptor. Although little or nothing is known about the narrators of the stories, Dunsany is adept at making their voices suitably distinctive and in their own way say something of the character speaking. Although a mixed bag of stories I think the collection overall shows Dunsany has a strong creative streak in his murder methods and he is also good at producing an unsettling feeling or atmosphere through his unorthodox approach to justice. Brevity I think is Dunsany’s biggest issue as it stunt and restricts him from fully developing a range of very interesting and intriguing ideas.