My reads with Mitchell have often been mixed. Some I thought very good (I won’t dare mention them as it’ll only upset JJ) and some which were plain awful and boring. Rereads haven’t always improved these experiences either. But this is a new Mitchell read for me so I had my fingers crossed this might be one of the better Mrs Bradley novels (well not all the time as it would have impeded my ability to turn the pages).

Here Comes the Chopper (1946) begins with school teacher Roger Hoskyn’s hiking holiday plans being scuppered when his intended companion, Bob, sprains his ankle. He is not too upset though as instead he takes said companion’s sister, Dorothy, out for the day on a long country walk. Suffice to say it is love at first sight for Roger. Dorothy is more non-committal, such as when Roger asks her if it would spoil her day if he kissed her: ‘Yes, it would… But if it would spoil yours not to, you’d better do it and get it over.’ Amongst this rather odd romance (more on that later) it soon turns out that they have got horribly lost. Keen to locate the train station so Dorothy can return home, she and Roger call at a country house called Whiteledge. They are warmly welcomed when they arrive as they conveniently mean that the dinner guests won’t number thirteen, which is very important to the superstitious hostess, Lady Catherine Leith. The guests are an assortment of family friends, members and staff and they are gathered in honour of young George Merrow’s thirteenth birthday, though it seems one of the guests is missing – the host, Harry Lingfield. He has not been seen since he had an altercation with another of the guests, Claudia Denbie, when they and George went out riding. No one will be surprised that Mrs Bradley is also one of the guests. 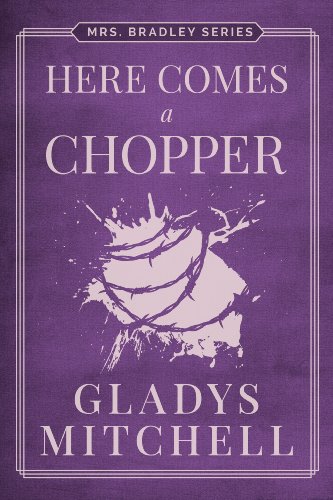 After a reasonably normal dinner, Dorothy and Roger make their escape. Yet their return train is delayed when the train driver says he saw a headless corpse on the tracks – though none is found. Various circumstances lead to them returning to Whiteledge one more time before finally getting a lift home via Mrs Bradley. Considering the bizarreness of their previous night, it is odd to say the least that Roger and Dorothy, accompanied by her brother set out the following morning to Whiteledge in a hired car. On arrival there is a search taking place for Lingfield who has still not turned up and the hue and cry is sounded when a body is eventually found; a headless and unclothed body. Evidence soon piles up against Denbie, who benefits in Lingfield’s will, was the last known person to have seen him alive, was out and about in her car during the night and seems to having some kind of relationship with him. The police are satisfied but Mrs Bradley thinks there is more going on especially since the witnesses cannot agree on the body actually being Lingfield’s. The remainder of the story takes place over many months, mostly centring on Dorothy and Roger, the latter of which seems to have given someone a reason to follow him and make attempts to assault him.

So as my synopsis may have hinted at points this was not a strong outing for Mrs Bradley. The story tends to be quite slow moving, although full of small incidences. This would not have been a problem if the story had a better investigation. The story had too much scope and Mitchell would have done better to have kept more of the action at Whiteledge and to have done more suspect interviewing when the body is first discovered. Since this does not take place clues are not particularly forthcoming, which is a shame as Mitchell begins the book very well, providing a suitably intriguing case which has its eccentricities under control. Instead the investigation section of the novel is not brilliantly structured and this part of the book does not seek to answer the many unanswered questions the initial crime raises. Conversely the reader follows numerous incidental events which although well written do not yield further clues to the reader. The long time over which the case occurs also adds to the slowness of the novel.

There were also some issues with the characters. Firstly there are a lot of guests at the dinner but only a ¼ really matter and even then only one (excluding Dorothy and Roger) gets focused on. The vast majority only seem to have the one purpose of providing the right number of guests. Yet even with Denbie, the dinner guest we see the most there are problems and for me it is her relationship with Lingfield. Mitchell seems to go out of her way to obfuscate this when there seems no reason for doing so and at times it is hard to make sense of what occurred between the two of them. Another issue I had with the characters was the strange dynamics between Roger and Dorothy and between Dorothy and her brother. From time to time in the book odd sentences get exchanged between the former pair, such as Dorothy saying to Roger, ‘I wish I could make you feel ten years old.’ It is an odd romance as during the middle of the book Roger’s affections swiftly turn to Denbie (as apparently throwing up in front of Dorothy killed his affections for her). One never feels convinced that Dorothy is truly in love with Roger and the warmest she ever gets to him is when she thinks: ‘that Roger, when not slavering after women old enough to be his mother, was quite a companionable young man.’ Roger is an okay protagonist but I do tend to side with the bus conductress in the story who thinks him ‘a weary willie.’ Although shown to be very good with his fists, he is also simultaneously shown to be a less than shining hero and doesn’t always cope with crises well, which felt a bit inconsistent. Moving on to Bob and Dorothy is it just me who thinks it is strange that he liked to show his sister off to his friends? Bob also seems a bit possessive of her, causing friction between him and his friend Roger: ‘Bob and Roger were, for the moment, antagonistic, and that she was the bone of contention.’ This is not an issue which comes up a lot in the book but it seemed strange to me nonetheless.

One thing which definitely annoyed me about the book is the murder method. Early on in the investigation Lady Leith blithely reveals how it was done, yet none of the police or Mrs Bradley have mentioned this. However, when it comes to the inquest this method is glibly trotted out by the police like it is an accepted truth, yet no real work goes into proving this. The solution itself was annoyingly drawn out over too many pages, beginning with lots of pages where parts of it are obliquely referenced, making little sense to this reader at any rate. I think it would have been a more effective solution if the story had remained at Whiteledge as there are aspects of it which felt rushed at the end. It felt a mistake to me to focus so much on Roger when he had little if anything to actually contribute to the ultimate solution. So yeah crossing my fingers didn’t work – maybe I should have crossed my toes as well?

However John at Pretty Sinister Books had a more positive reading experience with this one.