Master of the Day of Judgement (1921) by Leo Perutz

From the very first pages of this book we know something odd and definitely mysterious is going on; a foreword acting as a postscript, with the narrator looking back at the story he has told, but which we have yet to read. Baron Von Yosch is our narrator and the events he recounts take place over 5 days at the end of September in 1909 at Vienna. The problems which are besieging our intended victim, the actor Eugen Bischoff, are succinctly foreshadowed. There are also deliciously tantalising promises of the adventure to come such as ‘the dramatic hunt for the culprit, the pursuit of an invisible enemy who was not of flesh and blood but a fearsome ghost from past centuries lasted for five days… at the end of which a monster was waiting for us with upraised cudgel.’

It all begins when Yosch is asked to take part in a recital at Bischoff’s. The evening’s peculiarities begin with the arrival of the engineer Waldemar Solgrub. At first he seems just like an inconvenient and even embarrassing house guest, yet beneath all of this he has the ability to disconcert those around him, especially Yosch, who is also jealous of the attention he receives from Bischoff’s wife, Dina. His devotion to her is intense, though the reader soon begins to piece together that what they had was in the past. Bischoff is cajoled into performing an excerpt from the play he is about to perform in and goes off to prepare. When he does not return the others begin to worry and even more so when shots are heard. The locked study door is broken into and Bischoff is found dying. It is assumed to be a suicide, by most, but this does not stop some very nasty accusations being thrown Yosch’s way, with suggestions that he pushed Bischoff into his final act. Consequently Yosch’s honour is called into question and there are strong hints that a final sacrifice on Yosch’s part is the only way to salvage it. Yet not everything adds up and our disconcerting Solgrub sees murder, of the most sinister kind, wondering whether the two cases of suicide that Bischoff talked of before going into the study are connected with his own death. A mysterious phone call, mentioning ‘the Day of Judgement,’ which were also Bischoff’s parting words, further complicates the situation. This is an atmospheric and action focused tale, as several of Bischoff’s guests investigate his death, a decision which leads to more casualties along the way and an ending which makes you question the very validity of what you have read. 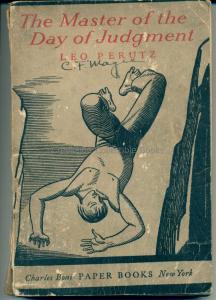 First things first, although this mystery may sound like an impossible crime, I don’t think the book treats it as such. Yes there is interest into mechanics of Bischoff’s death, but for me the greater interest lies with Yosch, the narrator, who is also the key to the narrative and perhaps its greatest mystery. He is not a narrator you feel you can totally rely on or trust. His mind at times certainly seems almost feverish or fragmented. It intrigued me that two different characters could have such differing opinions of him. One finds him shy, retiring and sensitive, whilst another finds him to be a ‘ruthless man of action, a man without conscience or inhibition.’ Others in the local club would go on to say he was a ‘splendid rogue’ and that they viewed him with ‘respectful hatred.’ Even more intriguing is the suggestion that he might contain all of these above mentioned qualities, especially since the reader never gets to see his more negative side. Consequently it is hard to marry up what is said of the narrator with what the reader sees, as for me at any rate found him to be an ineffectual man of action.

Solgrub is another fascinating character in the book. He is the true detective of the story and it is therefore a shame that many of his actions, thoughts and deductions are withheld from the reader. But again I think this is due to the author’s choice of priorities in the story. One aspect of his character which grabbed my attention was his nightmarish memories of his time in the Russo-Japanese war, not of the atrocities committed towards himself, but of those he committed towards others. What he did stays with him and therefore gives him a real sense of what evil is and why he is so keen to nip in the bud the malignant force at work, which he describes as ‘a monster’ and as a ‘repulsive,’ yet ‘compelling’ creature. He believes that even if war was to be abolished, ‘human vileness [would] remain[…]’ and for him ‘that’s the most lethal of all lethal weapons.’

Though looking at the remainder of the story it would seem that the greatest danger to life is the moment when human curiosity is overtaken and polluted by pride, echoing sentiments found in Christopher Marlowe’s The Tragical History of the Life and death of Doctor Faustus (1592). Perutz’s story also reminded me strongly of some of John Dickson Carr’s mysteries, such as The Burning Court (1937), with the solution oscillating between supernatural and natural causes. Though I think on the whole even if the ending of the book does make you question everything, the events do originate from natural/human causes one way or another. If we are to take Yosch’s version of events as truthful then it would seem as though drugs are the source of the deaths, drugs which make their users face their fears in the most disturbingly convincing visual manner. This option interested me as I felt it was a trope which has been used a lot in varying ways through the years. It crops up in Doyle’s Holmes’ stories for instance and it is even used in modern TV crime dramas such as Endeavour. But I like how Perutz leaves you feeling slightly unsure whether this is what actually happened. Yosch’s unreliability as a narrator can make you wonder whether if the work is just a pipe dream, created from Yosch’s imagination and the pipe is an image which features in the story itself, as Yosch says he experiences the drugs himself when he lights his own pipe that incidentally Bischoff used himself. It is hard at this point to not then think back to Doyle’s Holmes’ who is also said to have smoked a pipe when working on a case and he did himself use drugs. Is there a connection here or a nod to Doyle’s work or are these parallels a mere coincidence? Like with many other aspects of this story this is something I’ll have to ponder a bit more. Further comparisons could also be made between the atmosphere of this story and the work of Edgar Allan Poe, as it definitely has its gothic tinges and art and music all interwoven components into the narrative.

All in all this was an enjoyable read for me. It is a perplexing and even at times unsettling story, creating uncertainty within you. Yosch is an engaging narrator, who often raises more questions than answers. He so very often seems to be foreshadowing important pieces of information, yet by the end you begin to wonder whether he hasn’t been feeding you red herrings. If you are looking for a mystery which is out of the ordinary and that little bit different then this story from the 1920s may well be for you.