The Verdict of Us All: Christmas Special

For those new to this particular blog meme, The Verdict of Us All is where a panel of erudite and lovely crime fiction bloggers are given a very specific theme or question to answer. So far we have looked at The Author You Wished Had Written One More Book, Which Author You Will Never Read (where quite a few big names in crime fiction took a hit or two) and One Mystery You Wish A Favourite Author Had Never Written. Given the time of year the following theme was decided on for this edition of The Verdict of Us All: Favourite Christmas/ Seasonal Mystery.

Our recommendations begin with a bumper value collection of short stories, with Rich’s (who writes the Past Offences blog):

My Christmas recommendation is kind of a cheat. Otto Penzler’s collection The Big Book of Christmas Mysteries, published by Head of Zeus, features a massive 59 stories from pretty much every writer you can think of, in pretty much every genre from seasonal suspense to holiday hard-boiled and Golden Age mystery. The large roster of authors includes Agatha Christie (with two stories), Isaac Asimov, Sara Paretsky, Peter Robinson, John D. MacDonald, Ethel Lina White, Damon Runyan, John Mortimer and Thomas Hardy. A real selection box. Ellery Queen’s ‘The Adventure of the Dauphin’s Doll’ is one I really enjoyed, more for the description of an old lady’s bizarre doll collection than the solution. Josephine Bell’s ‘The Carol Singers’, meanwhile, is a proper seasonal tear-jerker. At £4.07 (currently) for the Kindle edition, this collection is massively good seasonal value and will probably mean you never need another Christmas anthology. Although they are pretty tempting…

Our next choice by Moira at Clothes in Books takes us to Christmas in the countryside:

My highly-recommended Christmas mystery is Envious Casca by Georgette Heyer. The plot is a cross between Heyer’s Regency romance The Unknown Ajax, and Agatha Christie’s Hercule Poirot’s Christmas (which would probably come 2nd on my list): houseparty, family Christmas, very horrible and despotic patriarch, murder, suspicion. The plot and detection isn’t bad, but what makes this the all-time winner is a combination of wonderful characters, great dialogue, and endless jokes. A scene with a play-reading – something quite modern and risqué – is absolutely hilarious. There are competing amazing characters in the vulgar Mrs Dean, with her ‘girlies’, and dreary Maud. A great achievement by Heyer is to make Maud completely thrilling. Everyone treats her as dim, and she is dull and lower class, (a great Heyer crime) – perhaps an unsuccessful chorus girl in the long-ago past. But we await her every entrance because she always gets great lines. It’s a proper gritty murder story – nothing cozy about this family – but also absolutely top-grade entertainment: just what you want over Christmas.

By the way, this book is also published as ‘A Christmas Party’. I once recommended it to someone, and she said ‘I looked on amazon and it has quite a few not-great reviews’ – but I was able to tell her that if you actually looked at the reviews, they were mostly from people saying ‘hey, I bought this book thinking it was a new one, but it’s just Envious Casca with a new title!’

Hard pressed to choose between two books, Bev at My Reader’s Block sneaks in two seasonal mystery choices: In The Santa Klaus Murder (1936) Mavis Doriel Hay provides readers with a fine example of that Golden Age standard–the country house murder. We’ve got the overbearing, difficult patriarch who holds the purse-strings and likes to make his children dance to his tune and punish them when they don’t. We’ve got his children–grown-up with lives of their own and a desire for dear old dad to pass the family wealth along to help make those lives more comfortable. And a fear that dear old dad may be too fond of his faithful, devoted secretary and be silly enough to marry her or at the very least leave her a sizable chunk of the cash if he decides to change his will. Jennifer, the youngest, just wants to be able to leave home and marry the man she loves. The servants are even hoping for a bit of an inheritance to help make their lives more comfortable as well. In other words, the place is simply bursting with motives. She provides all kinds of misdirection–through outright lies or a reluctance to tell everything one knows. There are red herrings and planted clues and mysterious messages and the phone call that never came. There’s the disappearance of a former chauffeur. It all makes for great fun and a rollicking good tale of murder and mayhem just in time for the holiday season.

AND (one of my most recent reads)…

This one is more for the fun than the mystery: In Do Not Murder Before Christmas (1949) by Jack Iams somebody doesn’t heed that advice. Toymaker Piet Van Der Vant, known as Uncle Poot to children who have grown up in Shady Hollow’s underprivileged neighbourhood, is killed on Christmas Eve–apparently for the wads of cash he has trustingly kept stuffed in the drawers of his toy shop. Uncle Poot’s toy shop is a favourite of all the kids–because his store is the first place their parents take them and because each year on Christmas Day he opens his shop for a Christmas party and lets the kids from the town’s poorest families pick out any toy that is left in the shop after the Christmas buying rush. Initially, it looks like an open-and-shut case (the murder weapon is found with convenient fingerprints all over it), but Stanley “Rocky” Rockwell, a crusading newspaperman becomes convinced there is more to the story and investigates. Jack Iams is a brand-new author for me and I’m glad I have two more of his titles sitting on my TBR stacks. I plan to savour them. This is an extraordinarily fun American mystery from the 40s. I caught on quickly to the motive behind the murder and the culprit, but Iams does such a good job with his characters and the narration that it doesn’t matter so much. This is a perfect mystery for the holiday season–set at the right time and a quick, fun read that fits nicely between all the seasonal activities–present-buying, card-writing, decorating, etc. Highly recommended for those looking for an interesting, light mystery for the holidays.

JJ at The Invisible Event like Rich also felt his choice might be ‘cheating,’ but since it’s Christmas we’ll let him have it… If we’re loosely defining a seasonal mystery as including the ingredients “winter” and “visiting relatives” then I go for The Footprints of Satan (1950) by Norman Berrow.  It’s a deliberately simple concept — an impossible trail of footprints in the snow — that is set up over the first 20 pages of nothing much happening to bed you down into the community, then a superb extended piece of discovery as an increasingly baffled crowd gathers to follow the route to its impossible beginning to its equally impossible terminus, taking in the many unusual stops along the way.  And that’s even before one of my favourite crime-solving coteries — Detective-Inspector Lancelot Carolus Smith and his men — show up.  Berrow conjures up a tangibly awestruck, chilly atmosphere by not trying too hard, and simply letting the village feel real, the problem appear as simple yet bamboozling as it is, and then throwing these superbly warm, human policemen in to get to the root of the thaumaturgy.  There’s little better for a warm night curled up inside with the wind howling at your windows…bliss, pure and simple.

The Puzzle Doctor, who writes the blog, In Search of the Classic Mystery Novel, shares with us his favourite historical Christmas mysteries, as well taking Christmas crime fiction in general to task…

My feeling of Christmas crime fiction is that it rarely feels Christmassy. Yes, Hercule Poirot’s Christmas is a fine mystery but apart from a family getting on each other’s nerves… 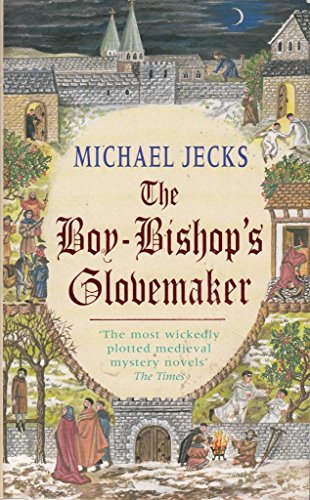 So my pick is one that has Christmas traditions running through it. Such as electing a Boy-Bishop for the season and allowing him to gift a pair of ornate gloves to a lucky person. Of course, this is a 14th century Christmas tradition that may have been unique to Exeter, but the Christmassy-ness runs all the way through The Boy-Bishop’s Glovemaker by Michael Jecks. It’s a chance to look at Christmas traditions that have long since departed and enjoy a character-filled mystery at the same time. Oh, and if 1321 is a bit early for you, you could jump forward sixty years and try Christmas in Southwark in Paul Doherty’s The House Of Shadows, as Brother Athelstan tries to organise the annual mystery play (not that sort of mystery) while trying to sort out a real mystery.

Speaking of Christie’s best known Christmas mystery, Brad at ah sweet mystery blog has a few words to say about it…

I can think of a few Christmas mysteries I don’t care for. Ellery Queen’s The Finishing Stroke comes to mind. It’s very Christmas-sy, right down to a dead Santa under a tree and many clues literally wrapped up as presents, but the solution ultimately disappoints. And Ngaio Marsh’s Tied Up in Tinsel failed to thrill despite an unusual set-up. Thus, I turn to Christie and the reliable Hercule Poirot’s Christmas. Not very imaginative of me, I know, but very, very good. It has the requisite large family gathered for the holidays, and this clan is so dysfunctional (thanks to its odious patriarch) that the Yuletide spirit is definitely lacking. If, perhaps, the family is a little too large and the characterization reduced to archetypes – the loyal son, the black sheep, the pompous statesman, the tempestuous Latin beauty, and so on – the mystery resolves itself beautifully. It’s also one of Christie’s few locked room mysteries, and while I acknowledge that this is not her specialty, it works for me. It also contains one of my favourites – and one of the most famous – clues in all of Christie, involving the butler and a calendar. So if you haven’t read it, do so, and a merry, jolly, happy to all!

And finally my own choice (which thankfully no one else picked) is two Christmas set novels by Joan Coggins: Who Killed the Curate? (1944) and Dancing with Death (1950).

Both are set in rural areas, bringing together characters who are less than cordial to one another and star one of crime fiction’s undeservedly least well known, but hilariously comic amateur sleuths, Lady Lupin. Moreover both mysteries are a huge amount of fun and great entertainment as Coggin has an eye for creating well-drawn characters and amusing dialogue. Often this can mean that the puzzle element of such character driven books suffer, but I think this is not quite the case with Coggin and I particularly remember enjoying the solution to the second mystery.