David Brawn, in the introduction to Harper Collins’ reprint of this story, brings up a salient point. The qualities which made Conway a popular writer in the 1880s, were not necessarily those found in popular detective/crime novels in 1930 (when Harper Collins printed this story in their Collins Crime Club series), which valued ‘cerebral ingenuity over dramatic characterisation’. Conway in a way was a good all round story teller, with ‘strong narrative power. His story is the first consideration always.’ Much emphasis is placed in Conway’s story on atmosphere and character emotions, in keeping with his tale’s gothic, melodrama and sensation novel roots. So if you are looking for a puzzle focused mystery, in keeping with those created in the 1920s and 30s, I think you will be disappointed with this book. However, this does not make it a bad read, I think it’s just important to go into reading earlier mysteries with criteria appreciative of the writing context.

Hugh Conway was the penname for Frederick John Fargus, who worked as an auctioneer. He had a very short-lived writing career, only four years, as he died in Monte Carlo aged 37. I have already reviewed one of his books on the blog, Called Back (1883), which also like this one, featured in a Christmas annual and Brawn’s introduction interestingly comments on this publication context. This reprint by Harper Collins also has an additional treat, including Andrew Lang’s parody of Darker Days (1885), which he called, Much Darker Days and was published a few weeks after the original. This parody is definitely a treat and I do have to admit to laughing out loud at a number of points.

But to return to Conway’s original story, it is narrated by Dr Basil North, who is writing a retrospective tale. He quickly familiarises the reader with his predicament, namely falling in love with a beautiful woman called Philippa, who unfortunately does not return his 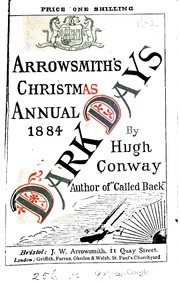 affections and instead marries another. This plunges him into a desperate state in the ensuing months, despite coming into a substantial inheritance, and his only respite is when Philippa comes back into his life one snowy evening. Her marriage, a secret one, to a man who goes under a false name, unsurprisingly does not turn out well. He has discarded her when she becomes pregnant, making her reside at a “relative’s” home. This child does not live and to add to Philippa’s woes her husband has written to her that their marriage was not valid as he was already married at the time (though his first wife has now since died). He plans to meet her tomorrow and pay her off. North is still madly in love with Philippa and suggests they go away together as brother and sister, (of course hoping she might change her mind on himself). Yet this plan goes badly awry the following day. Snow relentlessly falls and Philippa does not turn up at the appointed time. North goes to investigate and finds Philippa in a mad state, dropping a pistol by his feet. He then finds a very dead man, the man Philippa was supposed to be married to. In an instant he decides to save her from the law, convinced she killed him whilst not of sound mind. But how far can love go? And successful can he hope to be?

Conway’s novella opens with a strong urge to identify and sympathise with the narrator, such as when the narrator says:

‘To know why you must […] read my thoughts; the pictures of my past must rise before you as they rise before me. My sorrow, my hate, my love must be yours. You must, indeed, be my very self.’

This need to be understood threads in and out of the rest of the story and for me it brought out an interesting difference between this story and mystery fiction from the 1920s and 30s. The narrator wants to explain his emotions as he feels they in turn explain his actions, some of which are somewhat questionable. He is desiring a much more intimate connection with the reader. Yet conversely in 1920s and 30s mysteries I think, aside from mysteries narrated by the criminals themselves, emotions are viewed by the reader from the outside of characters and this time the reader is not trying to sympathise with these feeling but to analyse them for signs of guilt. The other main difference between this type of story and mystery fiction published 40 years later is that in such later works there would be a stronger desire to prove Philippa completely innocent, rather than a focusing on hiding her presumed guilt. Due to this difference the structure of the story is perhaps different to what golden age detective fiction fans may be used to and the ending might not be as satisfying as it was to original readers. It did feel a little anti-climactic to me. Though I think this work might be more in keeping with psychological crime novels as the mental states of both Philippa and Doctor North are consistently explored. The only golden age detective novel I felt this book could be similar to is Annie Haynes’ The Bungalow Mystery (1923), whose style echoes those being employed when Conway was writing and has some similar tropes.

Conway devotes a lot of narrative space to Philippa and North’s relationship and in many ways it reminded me of the relationship and changing positions of power found in Pip and Estella relationship in Charles Dicken’s Great Expectations (1861). Philippa is not as haughty as Estella, but she is said to be interested in wealth and rank. Interestingly with North’s myopic view of her, he tries to justify this gold digger attitude by saying that ‘she knew that she was a queen among women, and expected a queen’s dues.’ Whilst North’s narrative point of view has many up sides I do think though, it perhaps reduces how rounded a character Philippa can be. His perspective at times can be a little 2-dimensional and his approach to keeping her safe from arrest is intriguing in how it is also quite self-serving, keeping Philippa dependent on himself. I would have liked her to retain some of her feistiness after the body is discovered, but by and large she is quite passive and childlike, though given the historical, social and writing context this is not that unexpected. Feistiness/ rebelliousness in female characters was often either relinquished or punished in fiction at the time Conway was writing.

So on to Much Darker Days, which although only 60 odd pages long is very adept at covering the majority of the plot of the original 161 page story. In his original preface Lang says he is going to avoid the trend in ‘modern Christmas fiction’ to be ‘too cheerful in tone’ and by this I think he means cloying sticky sentimental cheerfulness, which he does indeed avoid. His parody takes place in a much more amoral world; there are no heroes and heroines, no nobleness of character. But we readers love it all the more because of this. The antithesis created between the parody and original works very effectively and it was a good decision by Harper Collins to publish the two together. Of course there are some definite elements of the ridiculous; Doctor North, has now become Doctor South (though doctor in name only) and for a time runs a fairground show before receiving his inheritance. An odd element, granted, but once you get your head around it works quite well. The money focus of Philippa briefly mentioned in the original story becomes more dominant in this text, with her not receiving ‘this quarter’s salary,’ being one of the reasons she is fed up with the man she married. Lang does also have fun changing the name of the man she initially marries, with his official name being Sir Runan Errand and his false identity being Mr Baby Farmer. The writer says this last one must be a term of endearment, but since baby farming was an actual enterprise open to criminal abuse at the time, it perhaps also hints at the lack of morality in his cast of characters and in fairness is in keeping with his disinterest in his own offspring.

At many points in Lang’s work he recycles parts from Conway’s text, but adding his own twists. My favourite example of this is in Sir Runan Errand’s letter to Philippa, when he is explaining his plans to meet her. In the original he just says that he will walk to her home but in this one Lang does make some rather amusing points, questioning the plausibility of the original:

‘As you are five miles from the station, as the weather is perfectly awful, as moreover I am a luxurious, self-indulgent baronet and as this story would never get on unless I walked, don’t send to meet me. I would rather walk.’

This corrective and questioning style comes up at various moments, with Lang highlighting points in Conway’s text which stretch believability or bits of incorrect grammar. Additionally there are also moments of exaggeration in Lang’s text. For instance instead of sleeping for 16 hours, Philippa sleeps for 16 days. A sense of the absurd returns at the closing of the novel which reminded me a little of Jonathan Swift’s writing style. Both Conway and Lang’s tales interact with the reader directly, but the way they do so differs quite substantially with Lang being much more metafictional.

So whilst Conway does tell an emotive and atmospheric tale, I think Lang’s story in a way stole the show, being an entertaining read which insightfully critiques its inspiration.