With such a title it would be easy to think this was going to be a historical mystery, yet in fact the title refers to the number of metres high a derailed train is, a derailment which leads to over 200 passengers being injured and stranded up a Norwegian mountain in the middle of a fierce and deadly snowstorm. Fortunately nearby there is an old hotel and the passengers are able to go there out of the storm. Yet this is only the beginning of their troubles, as Cato Hammer is shot at close range in the middle of the night. The story is seen from Hanne Wilhelmsen’s point of view. She is a retired police officer and is paralysed from the waist down due to an arrest which went wrong, a condition which has exacerbated her tendency to withdraw and isolate herself from others. Consequently the events which follow definitely put her outside her comfort zone. Her past work experience once known means that she is at the centre of things. Along with her, only a handful of others are really in the know of what is happening at the hotel: Geir Rugholmen, a lawyer, Magnus Streng, a doctor and Berit Tverre, the hotel manager. Although asked to investigate into the Hammer’s death Wilhelmsen refuses, emphasising how this is a job for the police and she is also keen to maintain an atmosphere of calm, hoping this will prevent the killer from lashing out with further killings. This hope is not fulfilled as a key witness who is prevented from fully conversing with Wilhelmsen is murdered the following night.

However there are many factors increasing how difficult this situation is. There are characters such as Kari Thue, who in her professional and personal life seems to have a knack for and a desire for creating discord and division between groups. Just the sort of person you want to be stuck with whilst there’s a killer on the loose – not. The elements too are causing great difficulties. Not only are the trapped within the hotel, but the hotel itself is physically buckling under the strain. Finally although not a difficulty as such, there is a further mysterious element within the hotel. The train whilst on its journey had an additional carriage added to it, one which was cordoned off at the platform and had special guards. Rumour has it there were royal personages in there, but Wilhelmsen is far more sceptical, especially when the people in this carriage, not only got rescued first, but commandeered the top floor of the hotel, with armed guards outside. Not only do events draw Wilhelmsen into solving the case, they also make her look at herself and the way her paralysation has affected her life.

It is hard to not think of the work of Agatha Christie when considering this book’s plot. To begin with we have a group of people on a train, whose journey is prevented by the weather, giving the story a slight nod to Murder on the Orient Express (1934) and the way the solution is pretty much handed to the police at the end when they arrive, strengthens this parallel. We also then have this group of people trapped within a contained space, the hotel, with a serial killer on the loose, which of course makes you think of And Then There Were None (1939). However, what I think limits further parallels being made between this book and Holt’s is due to pace and atmosphere. 1222 has moments of high tension when the majority of passengers begin to panic, but this hardly matches the tension achieved in Christie’s book. No doubt the much larger cast of characters prevents this, though in the main we don’t find out much about the vast majority of them – Wilhelmsen is probably the character we know the most about by the end. Furthermore, I think Holt’s story suffers from pacing issues, as the book is too long. Dramatic incidents do happen along the way but because of Wilhelmsen’s refusal to do a proper investigation it means that even when you reach page 300 of the 353 paged novel, we don’t really know much more than what we did when the first victim was found. Whilst I can understand Wilhelmsen’s decision, I think not having a more overt investigation in the story makes it a less gripping read, as everyone is too vague to really get suspicious about. Moreover, even when Wilhelmsen realises more action needs to take place to figure out the killer and prevent even more deaths, this realisation doesn’t lead to that much activity. Consequently when the solution arrives it lacks impact. You can see how she gleamed some evidence from clues planted earlier in the story but all the same it felt a little tenuous. All of which is a real shame as Holt has a really good setup and her narrative style shows a great deal of skill, especially in her chosen narrator: Wilhelmsen. 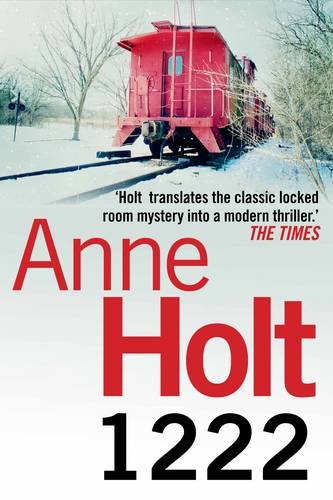 From the very beginning, even before we get to know more about Wilhelmsen’s disability and her personality, we can tell she is a rational and logical person, who avoids the emotional response. On the first page of the book she tells us about the crash: ‘as it was only the train driver who died, you couldn’t call it a disaster… a dead train driver comprises only 0.37 per cent of’ the people on board the train. She uses her disability to keep people at a distance and it also brings out quite understandably a defensive side to her. Her encounters with people invariably end up rather prickly and in truth she prefers to observe people rather than interact with them: ‘my relationship to other people is – how shall I put it – more academic in its nature.’ Her disability also reminded me of another fictional sleuth, Hans Olav Lahlum’s Patricia. Patricia is far less prickly than Wilhelmsen, though she suffers more from intellectual pride. Yet both of them for one reason or other tend to have limited access to the outside world and at times this is partially a voluntary choice. It is perhaps easier to warm up to Patricia as her conversation is less awkward and brusque, but on the other hand there is perhaps a greater sense of humanity within Wilhelmsen, whose has had a much wider range of experiences in her life. She’s flawed but she’s the only one who has concern for a runaway teenager, though the ending of the book does not suggest how far this concern goes. Having now read a novel with Wilhelmsen in I am not sure why the back of the book tries to align her with Miss Marple. Miss Marple relies a lot on her conversational skills in finding out more about people and solving cases. This is definitely not something apparent in Wilhelmsen who consistently struggles with this social skill. So I think it is wrong to try and package her that way, almost a disservice really.

So I guess the only thing now I have left to do is justify my final rating, as my review has seemed awfully negative. So what did I like? The setup, with the weather being a consistent danger and problem for the characters, the narrative point of view and Wilhelmsen, who Holt reveals to us in layers, which worked very well. In fact Wilhelmsen is one of the major strengths of the book and it is only a shame that her detecting skills are quite hidden from the reader. The other characters who make the small group of people who know what is going on in the hotel are also engaging and you can warm to them quite easily. Holt also has a writing style which carries you along very well, so you only periodically start having the concerns that I have talked about more fully in the review.

Rating: 3.75/5 (and yes I keep changing my mind on the rating every three seconds. Question to self: Why did I decide to have a numerical rating system?).