Murder at Beechlands (1948) by Maureen Sarsfield

This book is an interesting case of publisher intervention as the Rue Morgue Press who reprinted Sarsfield’s two Inspector Parry mysteries, make no bones about giving them new titles, which are meant to be more ‘genre-driven.’ For instance the first Inspector Parry mystery, which I read quite a while ago was originally titled Green December Fills the Graveyard (1945) and was reprinted as Murder at Shots Hall. Likewise Murder at Beechlands (1948) was originally published as A Party for Lawty (in America) and as A Dinner for None (in Britain). Whilst in the first instance you can kind of see why they changed the title, I think in the case of the second book it seems less necessary as A Party for Lawty, although not that dramatic, is in a similar style to other crime novels of the time, which later publishers haven’t felt the need to alter. I’d be interested to hear other people’s thoughts on this matter. Another mystery is the writer herself as the Rue Morgue Press have drawn a blank on finding any biographical information about her, as after writing three books (2 of which were mysteries) she disappears from the world of writing completely. Not even her age was uncovered and considering how much effort the Rue Morgue Press put into tracing out of print authors’ lives, this lack of information shows how much of a mystery Sarsfield is. Needless to say if anyone does know anything about the life of this writer do let me know.

N. B. (15/08/2016) Thanks to Karen Legge f0r unearthing a post by the Furrowed Middlebrow blog which gives the dates for Maureen Sarsfield (1899-1961) and also reveals that Sarsfield was a pseudonym for Maureen Kate Heard (married name: Pretyman).

N. B. (15/08/2016- 2 seconds after I went to see new blog comments) – for further info on Sarsfield scroll down to the comments section, curtsey of Santosh’s encyclopedic mind. 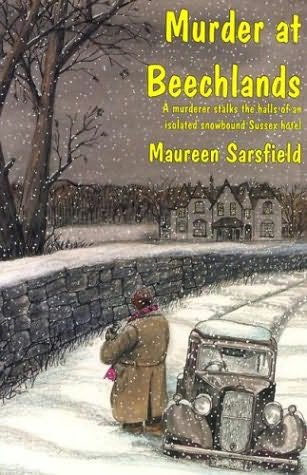 I remember enjoying Murder at Shots Hall (1945), particularly for its central female suspect, Flikka Ashley, who is a sculptor and whom rather steals the lime light from Inspector Parry, though in this novel he is much more the focus. I wouldn’t say there is a female character like Flikka in Murder at Beechlands (1948), with several of the female characters being rather prone to dramatizing things and being hysterical. Although I would say Christie Layne comes closest to Flikka and is the most sensible yet also the most interesting female character out of the group, as she undergoes the greatest metamorphosis during the story’s events.

Murder at Beechlands has wintry beginnings and the action takes place at the countryside hotel named Beechlands and the structure of this mystery parallels the country house mystery. The owner of Beechlands, Anabel Adams, mirrors the country house host, and like so many of these hosts she has her own private or not so private difficulties, including being in great financial distress. The hotel guests are unsurprisingly far more closely connected than they’d normally expect to be in a hotel. There are two rival businessmen who are considering investing in Beechlands, Julian Frake and Paul Livingstone. There are also two locals who have been drafted in by Adams for moral support: Christie Layne and Jim Bridges.  Cintra Norton, a Hollywood actress, who from the beginning of the story is suspiciously distressed and hysterical and Marigold Trent also feature in our story’s cast, but the main guest of honour is Wing Commander, Lawton Lawrence (Lawty), who has returned from South America and a dinner is being held in his honour. However, there is also one unexpected guest, Inspector Lane Parry, who has ended up at the hotel after his car gets stuck in a snow drift.

He arrives in the middle of a snowball fight and by the guest’s behaviour it is not surprising that he initially thinks the place is a lunatic asylum. Yet events take a sinister turn when Lawty is found dead in the snow, having fallen there from his window. Accident and suicide are quickly ruled out, as Parry soon spots that there is a bruise behind his ear. Motives for killing him come flooding in with Jim heading the list since Lawty seduced his wife away from him whilst he was in hospital recovering from massive burns incurred during his time in the navy during WW2. Lawty’s womanising reputation continues and involves several of the female guests. There is also the disappearance of £500 from Lawty’s wallet. Did this money tempt someone to drastic action? Many of the characters even without an obvious motive make themselves look suspicious when Parry switches the light on in Lawty’s room and discovers five of the guests in there with no good excuse among them. Parry is on his own to solve this case with the phone lines having been cut and the hotel snowbound. Over the next 12 or so hours Parry slowly pieces the mystery together, with his investigation punctured with the killer’s further outbursts of violence. Information is a dangerous thing to withhold in this story, as like in Agatha Christie’s A Murder is Announced (1950), the killer in this book is not afraid to silence those who have only a glimmer of knowledge about what has occurred. Heads are thumped, bodies are pushed down stairs and people vanish in the darkness, as the electric light dies out. Adding to the atmosphere is the hotel’s own sinister past within which three knocks are meant to be heard before death strikes…

The characterisation is one of the strengths of this book as Sarsfield shows well how characters cope, or don’t cope, with the strain of the situation of being in an enclosed space with a killer, and I think she captured the group psychology effectively. It was also interesting to see Parry in a much more vulnerable position without police backup, as he was a little bit full of himself in Murder at Shots Hall. Though to be fair to Parry he is quite insightful into human behaviour and personalities, perceiving from the off that Christie and Jim are outsiders in the group. When he thinks the hotel is an asylum he assumes they are the ‘keepers’ and in a way this is a role they fulfil during the story, being the characters who don’t lose their heads and support the other characters whose nerves are shredded and frayed. I think this was a good mystery on the whole and the killer was a satisfying choice. Their guilt is clued in retrospect though I think this could have been done slightly more. The only thing which I think needed to be improved was the pacing as in the middle there were a few slow patches, though I don’t think this is such an issue that it shouldn’t be read. Sarsfield is an intriguing author and her two mysteries are good reads, so if you get a chance to try one, I’d recommend giving her a go.