This week I am looking at Christie’s last published Miss Marple novel, Sleeping Murder (1976), a story I have always enjoyed a great deal and in keeping with the Tuesday Night Bloggers theme this month, there is a key character called Helen. Brad already pipped me to the post at looking at this novel so do check out his thoughts on it from last week, along with other Helen filled Christie stories.

The book begins with Gwenda Reed, having arrived in the UK from New Zealand. She has recently married and is now house hunting in the South of England, whilst her husband Giles is still abroad. After a week she finds her house, a Victorian villa on the road to the coastal resort Dillmouth. But as she goes around the house and once she has bought it and begins alterations, an eerie sense of familiarity with the place comes over her, along with bouts of incomprehensible panic. Things come to a head when Gwenda has a terrifying vision whilst watching a production of The Duchess of Malfi. This vision is of a young woman strangled in her new home’s hallway, the killer not really visible aside from their ‘grey, wrinkled – not hands – monkey’s paws…’ and Gwenda for some inexplicable reason knows the woman was called Helen. It’s not surprising that Gwenda thinks she is going mad, but thankfully Miss Marple is in the wings to save the day in more ways than one.

This is a mystery where we get a lot of background information early on, which is unusual, as often mysteries avoid such a move. Yet I think this is because Christie wants us to focus on a different aspect of the mystery and in fact I would say that this background information in some respects is supposed to wrong foot us. Whilst Miss Marple advises Gwenda and Giles to leave things alone, to ‘let sleeping murder lie,’ our two accidental/amateur sleuths take no heed and concerned for their safety Miss Marple also becomes involved. At times Miss Marple may seem to be a little in the background but fans of this character will trust that she is slowly gathering her clues for a dramatic conclusion.

First things first this was a re-read that I hugely enjoyed. If you haven’t read this one yet then you are in for a treat. A question which frequently kept coming back to me, was what it would have been liked if this book had been published when it was originally written, i.e. in the 1940s, rather than in the 1970s? If Wikipedia is to be believed this book was written between September 1940 and May 1941 during the London Blitz, technically making it the

second Miss Marple novel. Although it has made for a very good finale for Miss Marple it is by no means a finale in the sense Curtain (1975) is for Poirot. Whilst it does thematically connect to Nemesis (1968) in terms of them both being cold cases and including excessive love, this time round reading the book, I felt Sleeping Murder in many ways tied in with other Christie novels from the 1940s. Deceptively respectable appearances, along with misinterpreted behaviours and words are both themes which feature in this book, but also in varying variations in The Body in the Library (1942), Five Little Pigs (1942) and The Moving Finger (1943). Furthermore, as in Towards Zero (1944), the investigating characters explore the issue of a killer with slow burning anger, with emotions cleverly concealed behind passivity, only to violently explode against specific individuals. This comes up particularly in Sleeping Murder through Christie’s references to real life crimes and criminals, such as Lizzie Borden. Equally again like Towards Zero, Sleeping Murder uses animal references to talk about and identify criminality in others.

I think in keeping with the earlier Miss Marple tales, Sleeping Murder, retains the idea of Miss Marple being a ‘perfect Period Piece. Victorian to the core…’ However something I found interesting in this story was that Miss Marple does not immediately advocate solving the crime, she in fact advises the opposite, worrying what wounds will be unearthed. Gwenda may have to deal with a lot of painful truths and any answer found now couldn’t really help the main figures involved in the case. This is quite different from the detective figure who solves cases, cold or otherwise, for the sake of justice and truth. Yet Miss Marple does relent, once it seems Giles and Gwenda are determined to investigate the case anyways saying:

‘I have a feeling that there is something – something, perhaps, not very tangible – that would be worth taking risks for – even that one should take risks for – but I find it difficult to say just what that is…’

So I guess in a way this does differ from later Marple novels, such as Nemesis, where her sense of purpose when it comes to sleuthing is much more secure, whilst in this one Miss Marple’s concern and worry actually makes her ill. This being a re-read I was curious about the scene where Miss Marple strongly nudges her local doctor into recommending she go to Dillmouth to recuperate from her fatigue. I don’t think she is lying about her distracted mental state or her tiredness, yet surely if she wanted to go to Dillmouth for a stay she could does go anyway? Or is she wanting the doctor to say she should go so she doesn’t have to lie about her purpose for going to Dillmouth?

As I mentioned above, criminality in this book is concerned with suspects who appear

outwardly passive and calm and talk in such tones, even on troubling matters. For instance Walter Fane talks about his uncomfortable past with Helen in ‘plain unemotional statement[s] of fact’ and Gwenda feels sure that he is like ‘a house with the blinds down,’ i.e. hiding what he really feels. Fane is not the only character to act like this, including the killer, but it interested me that Miss Marple too talks about painful things of the past ‘as one who observes natural phenomena without surprise or emotion.’ Moreover, like many of Christie’s suspects in her novels, Miss Marple’s ‘expression was difficult to read’ and later comments suggest she is suppressing a great deal of anger, such as when it says, ‘there was, Gwenda thought, anger in it. Her lips were pressed tightly together, and her eyes shone very brightly, unusually so, considering her age.’ It has often intrigued me how criminals and detectives can share a number of personality traits, yet these same traits work in different ways within them.

Returning to the theme of Giles and Gwenda’s sudden eagerness to start digging up the past, I think the key element which influences this change is that as far as they are concerned Miss Marple’s initial hypothesising makes the inexplicable and the uncanny knowable and understandable. Therefore whilst there is much to learn, there is not necessarily something to fear, as Miss Marple has removed the ‘intellectual uncertainty’ (Freud, 2003: 138) and in effect given them a tangible intellectual puzzle to grapple with instead. This can be seen in the detached way Giles and Gwenda begin to view the case, describing it as ‘body in hall of a beautiful strangled woman. Nothing known of her but her Christian name.’ The clipped tone emphasises this detached manner in my opinion, almost giving it a book cover blurb sort of feel.

Circling back to the theme of the uncanny, I think this is a very apt term for Gwenda’s experiences at the start of the novel. The uncanny is more than something which ‘belongs to the realm of the frightening, of what evokes fear and dread’ (Freud, 1919; 2003: 123). In fact Freud goes as far as saying that unheimlich (the word uncanny is derived from), is actually etymologically closer to the word unhomely and that ‘the uncanny is that species of frightening that goes back to what was once well known and had long been familiar’ (Freud, 1919; 2003: 124). This is exactly what happens to Gwenda when she walks around her new home, not at that point aware she has lived there before. The place is supposed to be a new one for her, yet she keeps on finding prior knowledge of it, such as the old door, the original layout of the garden and the old nursery wallpaper. It is these uncanny moments, things that are familiar, but as far as she knows at this point shouldn’t be, which lead her to her traumatic theatre experience; the mental snapshot of a crime. 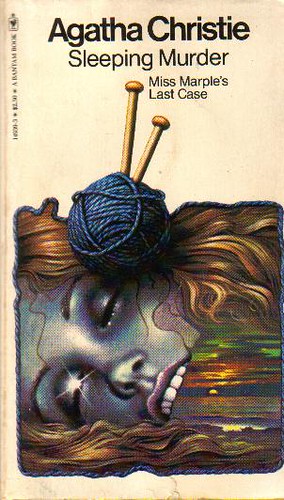 This also ties into what Freud says about the uncanny, as he says the uncanny ‘applies to everything that was intended to remain secret, hidden away, and has come into the open’ (Freud, 1919; 2003: 132). I felt this applied to Gwenda’s early experiences, as when she was a child the trauma of what she saw through the bannisters was locked away by her mind, intended to be left hidden so as to not trouble her, so when such things begin to come to the surface of her mind the experience is unsettling until Miss Marple can begin to explain it. I think Christie’s use of the uncanny gives her strong opening to her mystery. Equally in a way Christie gives the reader their own experience of the uncanny, with the way Gwenda describes the killer’s hands: ‘monkey paws,’ as for every well-read mystery reader this phrase should feel familiar, yet uncertain how to place it within the context of this story. In fact Giles makes this more explicit when he says to Gwenda after she uses this phrase that ‘this isn’t a kind of Murder in the Rue Morgue.’ Only at the very end of the book is this uncanny experience fully explained to the reader.

Unsurprisingly this novel gets a big thumbs up from me, as the ending is brilliant, I love what Miss Marple does (I’ll say no more but people who have already read this book will know which bit I mean.) This re-read also allowed me to notice the clues Christie places earlier on in the story and even then I missed quite a few of them again. There is also a sneaky bit of misdirection in the final third of the book, which some readers such as the Puzzle Doctor (host of In Search of the Classic Mystery blog), class as a ‘cheat.’ I didn’t interpret it this way as I think this is just another variation of Christie playing on reader assumptions about how to read a text. But all in all I think Christie gives us a very successful cold case mystery, making sure it doesn’t drag and that there is still plenty for her characters to investigate. Giles and Gwenda also make for a very strong accidental/amateur sleuthing team and work well together and Miss Marple’s role whilst not always centre stage is plausible and fits in well with the type of story being told.

On a final note I spotted that when Gwenda and Giles go to visit a sanatorium for patients with mental health issues, an inmate, with a glass of milk talks to them about their child and refers to something ‘behind the fireplace.’ This might be something which is already well-known but is this small scene where Christie got inspiration for her later novel, By the Pricking of my Thumbs (1968)?