Tuesday Night Bloggers: A is for April… and Anything Goes: What makes a good Aristocratic Sleuth?

Ever keen to try something new, the Tuesday Night Bloggers have gone for a different type of theme this month: the letter A. Be it a book title, author, country or a more abstract theme; it all goes, as long as it begins with the letter A. Moira at the blog, Clothes in Books, is collecting the posts this month so remember to check out her blog.

This week for the Tuesday Night Bloggers’ final look at all things beginning with A in crime fiction, I am looking at the aristocratic sleuth. Such a detective type came up early in the history of the genre with Edgar Allan Poe’s Chevalier C. Auguste Dupin, though not

much is done with his aristocratic background in the stories. Others invariably followed such as Baroness Orczy’s Lady Molly Robertson-Kirk and John T McIntyre’s Ashton-Kirk. The latter of whom featured in 4 novels, beginning in 1910, and solved crimes for the sheer love of it and is seen by many to be a forerunner of the aristocratic sleuths created in the 1920s and 30s, such as Dorothy L Sayers’ Lord Peter Wimsey and Margery Allingham’s Albert Campion. Often in the past such sleuths have been younger sons of aristocratic parents and have turned to crime fighting as a means of occupation – you’ve got fill in the time somehow, right? However financial difficulties have also been motivators for crime solving. In the present though I think the pendulum, gender wise, has swung the other way and most aristocratic sleuths created now tend to young women, who like their male predecessors are looking for a way of occupying their time.

In answering the question of what makes a good aristocratic sleuth I can only really answer for myself, but hopefully my ideal in this regard is not too outlandish. For instance it is said that the ‘personal lives and histories’ of the aristocratic sleuth ‘constitutes part of their strong appeal’ (Haynes, 1999: 23). To an extent I agree with this as I find the milieu of aristocratic living quite an enjoyable one in a mystery novel. However I am not a reader who needs to know the sleuth’s entire family tree and when it comes to their ‘personal lives,’ I think it is down to individual writer skill, as to whether this element is done successfully or in a poorly and dully predictable manner.

Detractors of aristocratic sleuths frequently suggest such detectives are insufferably arrogant and aloof and in the case of S. S Van Dine’s Philo Vance, they would be completely correct. However I think other writers such as Sayers have managed to achieve a middle ground with their aristocratic investigators. This middle ground is unsurprisingly a rather murky area. Any sleuth who resides in this place has to be sufficiently different and unusual that they maintain reader interest, (with their wealthy backgrounds giving them better access to education and niche pockets of specialist knowledge), but are not too distant from the reader that they become condensing, standoffish and impossible to identify with.

those who may have started out buffoonish, but went on to mature mentally and emotionally, moving away from being a cardboard cut-out and come across as more fully human. Of course doing this is by no means an easy feat and in fact some readers have hated this process happening to their favourite aristocratic sleuths. But I feel this is what partially aided Lord Peter Wimsey’s longevity. Albert Campion goes through a similar process to a much less intense degree and he is an unusual aristocratic detective as he has broken away from his upper class background, though of course this does not stop him being able to move in upper class circles comfortably, nor marrying a fellow aristocratic.

Though aristocratic investigators are often deferred to and accepted by police detectives in older mystery fiction, using them for their ability to fit in with fellow toffs, I think what makes a good aristocratic sleuth is their ability to function in cases outside of their own social circle. This ability often ties in with whether they are operating within that murky middle ground I mentioned above. Wimsey does this quite well in my opinion, as although his early cases stay within his own social circle, the later mysteries successfully move beyond it.

One aristocratic sleuth which I have yet to mention, is Ngaio Marsh’s Inspector Alleyn, who is the younger son of a baronet. On the one hand he avoids being annoyingly

buffoonish, but on the other hand the main reason he does not work as an enjoyable aristocratic detective is his sheer blandness. Yes he is gentlemanly and polite and able to converse easily with the upper class, but there is a lack of oomph (for the want of a better word) and there is nothing very distinctive about him. Whilst I think aristocratic sleuth eccentricities can get out of hand, if they are used minimally and effectively they can also make for an irresistibly quirky detective.

During the golden age of detective fiction successful attempts were made at creating both aristocratic sleuths in the comic mode, (though the comic effect does need to be controlled in my opinion,) and aristocratic sleuths who have undergone personal changes or have had to confront personal problems. In some ways these successes became blue prints or templates. This is good in one sense but for me there is also a negative side to this happening. This is because a lot of later writers in my opinion have adopted sleuths such as Wimsey and his 1920s/30s setting, as a template, but have added little innovation of their own, especially in the area of such sleuths having personal traumas or problems. Consequently I found these works becoming increasingly too predictable and 2 dimensional for me and I find it harder to identify or sympathise with such characters.

This brings me almost to a negative reversal of my starting question: what doesn’t make a successful aristocratic sleuth? For me modern attempts to set mystery novels in the 1920s and 30s have had uneven success. I already mentioned how many of these novels include aristocratic young women. From what I have read of these works or read about them, they have strayed into becoming rather formulaic. Such sleuths often turn into heroines in distress and the love interest looms rather too much, as Sayers would say. Solving murders at some points feels more like a means for finding a husband. Perhaps it is just me and not the books themselves, but I find it easier to believe in Wimsey and his world than the modern recreations of it.

However, I think it is even harder to be successful at creating a mystery novel set in modern times, which has an aristocratic sleuth. The age of the amateur sleuth is decidedly over or at any rate has had to adapt and evolve a lot, so often the aristocratic sleuth in modern times has had to become a policeman, such as Elizabeth George’s Inspector Lynley. Granted I have only watched the TV series featuring this aristocratic detective, but I have yet to be bowled over by him. For me he comes across as a little bit too aloof and I have invariably ended up irritated by him. I did however enjoy his partner, DS Barbara Havers, and one way the aristocratic sleuth has been used, especially within a police force setting, is as a way of examining class divisions.

To end on a more positive note on modern writers, two writers in the pastiche mode, who have successfully created aristocratic sleuths are James Anderson and Simon Brett, with his Blotto and Twinks series. 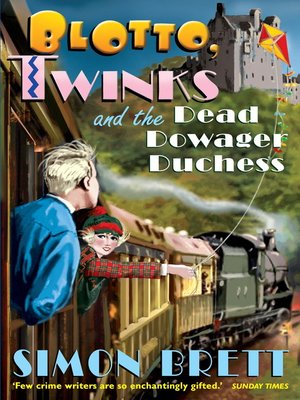 Something which surprised me when researching this subject was that it often felt like there were more modern novels featuring aristocratic sleuths working within a 1920s/30s world than there are from 1920/30s mystery writer themselves. Therefore I would really love to hear of other, perhaps more obscure examples of such detectives from this period, as I am sure I’ve forgotten tonnes of them.