Vintage Mystery Scavenger Hunt Item: Any other piece of furniture

A reoccurring whinge of mine for the past year or so has been over how expensive it is to get a hold of this book. At last though I finally got in luck and managed to get a copy which didn’t feel like day light robbery or in fact require a robbery to pay for it. This copy also had its original dustjacket and it was interesting to see the different review snippets. John O’ London’s Weekly said the book had ‘plenty of lively and unusual characters, a satisfying mystery, and enough humour to cheer up even the wettest day of a holiday,’ whilst Punch succinctly said it was ‘really funny and really puzzling.’ A slightly longer quote from the Glasgow Herald categorises Ames’ work as ‘“thrillers” which are in a class by themselves’ and goes on to say that ‘in addition to a good mystery, always cleverly solved, [… Ames’ work has] wit, and the kind of humour that compels the reader to laugh out loud.’ Finally the Daily Telegraph reviewer said ‘I am very attached to Dagobert and Jane Brown’ – a sentiment I certainly endorse.

The Body on Page One (1951) begins with Jane and Dagobert Brown selling off their furniture in preparation for more living on the road and travelling. At Dagobert’s instigation the pair of them plot fictional murders for their neighbours who live in the other flats, in particular Jack Nicholson and his son, Apollinaire, who are not easy neighbours to get along with at times. Late night parties and incidences involving the fire brigade feed into this difficulty and now Jack seems to be entering their flat and damaging the furniture. Jane’s mind doesn’t stay on this bizarre behaviour for long as it seems Dagobert has been receiving love letters. He claims to not know who ‘Lilith’ is, but Jane is still less than impressed, given the less than glowing references made to her in these epistles. There is also the issue of the last tenant that Jane and Dagobert sublet their flat to, who has neither paid the bills nor returned the flat key. With all of these unusual circumstances bubbling beneath the surface, a leaving party is held for the Browns in the Nicholson flat, which is mostly attended by other flat owners, but also a couple of outsiders. Whilst little happened at the party itself much had been going on in the rest of the building, including murder and then what the police assumed was suicide. Ames carefully chooses his corpses and alibis are thin on the ground for the rest of the party guests. Although the police are satisfied by the case, the Browns gradually become convinced that the true solution has not been hit upon and wonder how the other odd circumstances prior to the deaths fit in. In a thriller like way I suppose they come across more and more evidence, as more and more becomes disclosed about the party guests and their relationships to each other. As the Browns had mostly been travelling the last few years their knowledge of their neighbours is slim to say the least and Ames hides a plethora of secrets behind respectable façades.

The novel starts really well and shows the advantage of having a crime writer as a narrator, namely that the actual writer can work in a lot of metafictional humour, which is what happens here. Jane starts the story by writing: ‘I have always wanted to write one of those books with a body on the first page’ and it seems like her wish is granted when she arrives home. This moment of shock and terror, of finding Jack Nicholson sprawled on her sofa with a knife in his hand, is overturned and the tension dropped when we realise that he is only pretending to be dead. For such a joke we’re not surprised that Jane would happily plan Jack’s real death. Jane’s role as a writer of mysteries, mysteries based on cases she and her husband have been involved in, also helps the pair to look at the deaths in a more detached way, though this perspective is not held throughout. There is also an amusing moment at the leaving party when Jane is talking to another guest. She writes that, ‘I told him, and we chatted animatedly for several minutes about the creative writer’s place in modern society, handicapped only by the fact that he had decided I was Dorothy Sayers.’ A comparison made humorous by its sheer inappropriateness in terms of both authors’ writing styles, though it is fair to say that both are strong portrayers of characters. 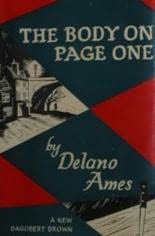 Whilst I wouldn’t say there is as much laugh out loud humour in this book as there has been in previous novels in the series, this story is still relatively light hearted, with a lot of the comedy resting on Jane and Dagobert’s relationship. At several points in the story both of them happen upon an important piece of information, though amusingly Jane arrives at these pieces much more easily, with characters confiding in her, whilst in comparison Dagobert works away secretly by himself, putting in a lot more effort and strain to achieve the same goal. I think this sort of outcome balances out Dagobert’s tendency to sleuth by himself. A mild spot of marital jealousy features in this story, fuelling some of the investigative work and surprisingly also creates a greater degree of psychological complexity in the book. It also more importantly, for us humour enthusiasts, gives Jane a prime opportunity for some dry humour. Another source of humour can be found in the child Appollinaire, who reminded me of Bertie from Alexander McCall Smith’s 44 Scotland Street series, as Appolinaire is ‘alleged to be seven, though Dagobert had a theory that he was really a dwarf, and in his late sixties.’ A lot of Appolinaire’s humour comes from the way he appropriates more grown up words and tones, intermixed with the usual antics of a seven year old.

One thing which has always beguiled me with the Browns is their carefree and transitory lifestyle, which Jane refers to when she writes that ‘in principle Dagobert and I live in Flat C on the ground floor. In practice we live in suit cases and sub-let to men who disappear suddenly without paying the telephone bill.’ And for me this sort of lifestyle is not something we often see in other fictional sleuthing couple contemporary to them. However, I think Jane does reveal some misgivings about this lifestyle in the story, such as when she talks about them having to give up their cat, Grippeminaud:

‘We shall, I suppose, have to leave Grippeminaud behind us with the other household gods we are so ruthlessly disposing of. This is sad, but the kind of thing which happens to people who marry Dagobert…’

On Jane’s part at least there is a certain amount of sacrifice involved in going along with Dagobert’s schemes. Thankfully there are lots of things she also enjoys about travelling a lot.

Looking at the remaining characters I would certainly agree with the reviewer in John O’ London’s Weekly, as Ames does provide an excellent range of ‘lively’ and ‘unusual’ characters, who are psychologically complex and not all that they initially seem to be. Yet this complexity is not forced onto us or allowed to hold up the plot and I like how this complexity is revealed to us gradually, without lots of long passages involving their individual backstories. Furthermore, the secrets they hold are often surprising but also largely believable.

Although mostly a light hearted novel I think that this story has a darker and more emotive quality to it, especially nearer the end, where the pain of various characters is strongly palpable. Interestingly an editor Jane wanted to work for told her, her work needed to contain more love interest, yet in this story she suggests that the love interest does not need to be a romantic one and that intense feelings of love can be found from other sources, which was an idea that rather appealed to me. Again I think this adds to the more emotional revealing of the solution, though Ames being Ames does lighten the mood in the last couple of pages. Ames choice of criminal is a clever one, carefully hidden underneath the mad antics of the amateur sleuths and suspects. My only niggle with the book is that I think the solution could have been a bit more substantiated, though I guess this is more in keeping with the thriller slant to the book. It is not an out and out thriller by any stretch of the imagination, but the reactive approach the Browns often take to sleuthing gives it a thriller feel at times.

Thankfully Murder, Maestro, Please (1952), book number 6 in this series is not too hard to get a hold of so there won’t be any whinging by me on that front. That I will save for No Mourning for the Matador (1953), book number 7, which at the moment seems even harder to get a hold of than The Body on Page One.