With only a day to go until the end of the month I am sneaking in one final read for Rich’s monthly crimes of the century challenge, which he runs at his blog Past Offences. Aside from the relevant publication date I was intrigued by this book due to the plot significantly featuring Clara, the wife of Daly’s serial sleuth Henry Gamadge. I only came across Clara briefly in Death and Letters (1950) and I thought this read would give me a chance to find out more about her and see what

sort of role she has in her husband’s detective work.

Clara is staying at a rural isolated cottage, awaiting her husband and some friends who are meant to join her for a holiday. We know that her husband has been sent off on mysterious war work. With only her and a maid in the house this book does begin with a rather HIBK atmosphere, especially with both of their overactive imaginations. For over a week she and her maid have had sightings of a mysterious woman, who seems to be watching them, but never comes close enough to the cottage to be identifiable and Clara gives herself a greater shock when she thinks she has found the mysterious woman’s clothes in the attic; the door of which keeps opening. The narrative sums up the mental state of the women well when it asks the question: ‘Was she getting sunbonnets on the brain?’ Into this situation there is also sinister gossip about the landlord of the cottage, Alvira Radford, and whether or not her rich sister died a natural death. 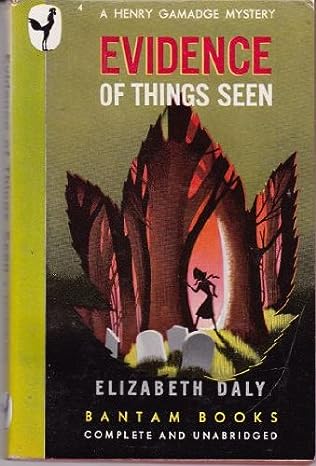 However Clara’s fertile imagination seems to be vindicated when Radford’s buggy is overturned by her startled horse, breaking Radford’s ankle in the process. Along with two friends Clara and her maid prepare themselves for nursing Radford through the night in their cottage. Nothing untoward happens until it is Clara’s turn to watch the patient, who rapidly becomes an ex-patient when the mysterious woman sighted many times before, makes a far more dramatic reappearance. When help arrives Radford is found strangled. Unsurprisingly Clara’s testimony is treated with a certain amount of scepticism, especially when it seems to imply the work of a ghost and instead the police are far more interested in her mental state and what she might be capable of doing. Thankfully for her Henry obtains some leave and is able to unravel the mystery.

So first things first, Clara. I have to admit I was a bit disappointed by her. The beginning of the book ends up with quite a whiney tone due to the maid fuelling Clara’s overactive imagination. The maid in particular makes a rather big deal of them being in the house alone without a man to protect them. Considering the setting they are in, their perception of danger didn’t fit with the reality of the book. Furthermore, despite some brief hopes that Clara would be an active character with a can do attitude, her role in the book dissipates dramatically once Henry arrives and takes over the case. She then ends up assigned the role of being a doting appendage to him, hoping that she will not embarrass him and act mature enough for him, what with them having a 14 year age gap and all (something I definitely didn’t pick up on in Death and Letters). It would have been nicer if Clara had been able to unearth more information before Henry arrives, as she does seem to miss quite a few obvious clues.

The war does feature in the background of the book with there being a dearth of young men and women and availability of certain items such as petrol is limited. If it had been a longer novel I think more could have been done with this aspect as Daly does leave some tantalising possibilities with the refugees one of the locales has taken in. There is a host of nationalities in this refugee group; German, Greek, French and English, yet this range is never fully explored, apart from a hasty couple of sentences near the end of the book.

The limited number of suspects did rather limit this mystery and I don’t feel like we ever got to know the suspects well, in the way that more is unearthed about the nature of the victim, Radford. Consequently although there is a good surprise ending, pieces of which I had concluded myself only to discard them, it still felt a bit of a swizz. In terms of character psychology some elements didn’t add up and I think if we had gotten to know the characters more the solution might have come across as more satisfying.

So I think having tried three books by Daly I am going to give her a rest for a while, a long while, as for me there is just something missing in them that prevents them from being really good reads.