This was my first experience of reading the work of Australian crime writer, Jennifer Rowe, and is another read this year which helps me meet my unofficial goal of reading more crime fiction from countries other than the UK and the USA. Even though it was published in the 1980s, this story definitely has a golden age feel to it. Not only does the book open with a cast of characters and a map of the family home, but in many ways this story is a more modern and updated version of the country house mystery. 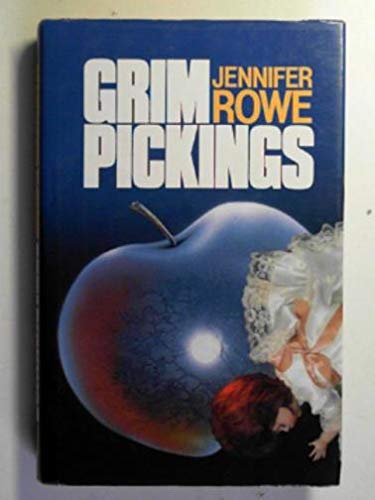 The Tender family (and yes that surname is fairly ironic) are gathering for the annual apple tree picking, which takes place at the eldest family member, Alice’s, home. Aside from Alice, there is her niece Betsy and her husband, along with their mostly grown up children, Chris, Anna and Rodney. As well as family members, including Chris’ wife Susan, there are also old friends of Chris’ from his university days and they too bring their own spouses and even in one case their 7 year old daughter. Initially as you can see there are quite a lot of characters to get used to quite quickly but to Rowe’s credit the number never becomes unwieldy and by the end of the book you have a firm grasp on all of them. As you might expect there is a great deal of foreboding about the occasion. Old family friends are wishing they had come up with excuses to get out of it and in the case of Anna the return to the old family home reminds her of her recent separation from her husband. Usually in such mysteries it is the oldest family member who is the most malevolent or the most despotic. Yet in this story that title goes to Betsy, which we learn about very early on in the book: ‘this might be Alice Allicott’s house, but the annual apple-picking was a Betsy Tender production, played with her cast and by her rules.’ In almost every comment Betsy makes there is an insidious and poisonous undertone, hidden by a veneer of politeness, which makes her victims not only smart from the insult but equally feel powerless to retaliate and often end up feeling guilty. Betsy’s tongue in particular focuses on the women of the group, especially Susan, whose nerves are rapidly disintegrating.

Into this already unpleasant gathering enters Damien, Anna’s philandering husband, whose appearance has an effect akin to lighting several kegs of gunpowder. Before he arrived the tension is described as like ‘something gnawing away underneath the surface.’ But his arrival soon brings all of the ‘raw feelings’ to the surface. No mystery reader will be surprised that by morning someone is dead in the orchard. Although the reader knows a little more of the activities which occur the night of the murder, it takes a while to be able to interpret them correctly, as Rowe is all too good at making you interpret certain information or clues in a particular way. Motives of course abound and there is definitely a full quota of suspiciously acting people, lying to the police. No one is above suspicion, not even the next door neighbour! Aiding the police is one of the group, Verity Birdwood, who is pretty much a complete outsider, being the friend of Chris’s friend, Jeremy’s wife (yes this did feel a bit of a stretch). Yet this is expertly written family drama, as various group members try to figure out or bury the truth, turning on its each other at frequent intervals and all the while there is still a killer on the loose who may not be quite finished…

In one word I thought this book was excellent. Rowe scores highly on all fronts. First of all there are the characters, with quite a few of them being brilliantly unpleasant. Betsy of course is the obvious character to think of here, but as the book progresses several other candidates emerge. This partially comes about due to one of the underlying themes in the book of gender roles. Betsy is an old fashioned type of women and a lot of her barbed comments are against the more modern women in the group who work. For Betsy boys will be boys, but girls need to be overly protected. So convincing is she, that some of the male characters, especially Chris, invariably end up siding with her, endorsing and condoning such ideas because Betsy’s system is one which benefits the men the most. This is probably why I loved the character of Alice so much as her fiery retorts at Betsy are superb and you end up practically cheering after each one of them. It was also interesting that a character I had initially felt sorry for, I ended up disliking a lot, with the investigation in the middle revealing a much more unpleasant side to them. This intrigued me as it showed how much Rowe plays with reader expectations and assumptions in this book and not only is this something which also comes up in the clues of this case, but also in the solution.

Returning to Betsy, a parallel which came to my mind fairly early on, was with the victim in Andrew Garve’s No Tears for Hilda (1950). Like Hilda, Betsy ‘seemed to be able to convince herself totally of anything. Her absolute imperviousness to the feelings of other people was quite extraordinary.’ Both characters for me showed that some of the most sinister people in fiction are those who innocuously disguise their attacks on others with politeness and seemingly kind acts. Verity Birdwood is another character which interested me, as she is quite a mystery. Certain things in her background are hinted at but are not fully explored. This is kind of understandable given that this is the first book in the series, though for me the way Verity is introduced into the book, the story actually felt more like a book in the middle of an already established series. Verity has a tendency to observe rather than get involved in scenes and she is said to be ‘a bit solitary’ and ‘people find her eccentric.’ She is described as having quite a scientific way of viewing the world, with her ‘detachment’ from events being said to be ‘nothing short of inhuman.’ Yet this is not an entirely fair statement as near the end of the book she is shown to feel a great deal. However she does a superbly brutal summing up of the case at the end. Kindness is not shown for the sake of it and the true state of affairs between the characters is systematically exposed.

Although I did guess one of the key secrets in the case quite fairly on, the solution was by and large a surprise. It is the sort of book where you probably guess the guilty person, but are still kept guessing throughout the book right until the end, as events keep making you second guess yourself. After all if this investigation was a horse race, there are the odd suspects who are long shots but the vast majority are fairly evenly matched. This mystery on the surface is deceptively simple but when you look back at it is actually a complex and well-crafted mystery. Although the narrative does move from character to character, in the main it mostly stays with Verity’s friend, Kate, which I thought worked very effectively (no name bias or favouritism involved I promise). Kate is not too in the centre of things that she loses perspective or is unable to gain a fresh one at a latter point, but equally she is close enough to events to pick up on key information.

So yeah if you haven’t already twigged this is a great book and definitely worth a read. Rowe is a writer I’ll definitely want to return to.