The Danger Within (1952) by Michael Gilbert

My journey into Gilbert’s work was quite a bumpy one, beginning with Mr Calder and Mr Behrens (1982), a short story collection which nearly put me off Gilbert for life. However I gave Gilbert’s work another chance last year, reading Death Has Deep Roots (1951), which was surprisingly good and today’s read, my first of the year, has exceeded this previous read.

Detective fiction has been set in all kinds of unusual places: space, private zoos, remote islands, trains, but I have to say this is my first mystery novel set in a WW2 Italian POW camp. This is the type of setting which can easily be mishandled, yet Gilbert’s depiction of life within this camp is first rate, portraying both British and Italian characters fairly, not resorting to stereotypes. Though this shouldn’t be too surprising considering that during the war Gilbert spent a fair bit of time in various Italian POW camps. Gilbert in 1943 was in North Africa as part of the Royal Horse Artillery, yet eventually found himself imprisoned in Italy. He and his friend Tony Davies made numerous escape attempts, some of which find their way into the story. Gilbert’s time in the war is also briefly examined in the introduction of the Rue Morgue Press’ reprint and although facing much danger his experiences are at times amusing such as when he disguised an escape talk he was giving by calling it, ‘The Principles of Marine Insurance.’ Apparently the Italian guards didn’t find it curious why such a topic should be so popular. I was wondering whether due to the setting, this book would become quite bleak and depressing, yet again this is not the case, with Gilbert injecting pockets of humour into the tale, albeit some of it black humour. Death is an ever present figure in this book, which heightens the tension in the book, though Gilbert does not allow it to quench out the prisoner’s hopes and sense of humour.

From the very beginning we are aware that there is talk of the British plans to enter Italy, an event which becomes a greater and greater reality as the book unfolds. Yet the reader is aware that although this is good news for the British prisoners of war, it also leaves them open to new dangers, with the fear that if the Italians surrender, the German army may swoop in with reprisals. This is the backdrop to this mystery’s central crime, the death of a prisoner in highly unusual circumstances. The prisoners are kept in different huts and in hut C are six notorious escapers and general troublemakers. Underneath their kitchen they are digging a tunnel, yet they are in for a surprise when one morning they find Cyriakos Coutoules, a Greek POW dead inside it. Their first thoughts are to remove the body elsewhere to protect the tunnel, sacrificing another one underneath a different hut. Yet after this initial response they soon begin to wonder – how did Coutoules get inside the tunnel? Their hut is locked from the outside at night and it takes four men to lift the tunnel’s opening. It appears Coutoules has died of asphyxiation, yet it is unclear whether the partial tunnel collapse caused this or whether he went into the tunnel already dead. Questions are raised as to whether the six in hut C were responsible, as rumours had been going round that Coutoules had been informing on the escapees’ activities.

The Italian guards and officers are quick to cry murder and some unfortunately placed fingerprints in the sacrificed tunnel put one of the six, Captain Roger Byfold in very hot water. However some of the British prisoners are quick to realise that the Italians are acting out of character and in a way were too prepared for this death. Could they be involved somehow? And are they aware of Hut C’s tunnel? But when Byfold is arrested the British prisoners begin in earnest to try and solve the mystery, though whether it will save Byfold remains to be seen. 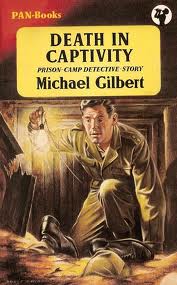 One of the main strengths of this book is that Gilbert doesn’t impose a detective fiction plot onto a WW2 adventure setting, as the detective work is skilfully interwoven into the text and the fairly unique setting is used to good effect, making the central mystery very intriguing. For the characters and readers initially it feels like an impossible crime as in such a setup there are such high levels of surveillance from guards and prisoners alike, it beggars belief that anyone could commit a murder and dispose of the body in such a way and not be noticed. It is also to Gilbert’s credit that he doesn’t use the plot version of a cop out and have a character who knows what has gone on but hasn’t felt like telling anyone until the last few pages.

Goyles, one of the six, is the character who does most of investigating, yet the references to detective work and novels is minimal and not overdone. Instead Goyle’s actions are shown to spring from a natural response to an ever-changing and highly dangerous situation. Given the setting you could easily expect Gilbert’s writing to be all action, with little time for characterisation. Yet again this prediction would be wrong as although there are a lot of characters in the story, given that it is set in a POW camp, Gilbert wisely focuses on dozen or so characters to differing extents. Gilbert, due to his own personal experiences, has captured the social dynamics in such a closed community well, including the differing opinions prisoners had towards escaping, as not all were keen on rocking the boat in this fashion. This also allows for some comedy to creep into the book, as well as showing the animosities which can build up. Camp entertainment is another way Gilbert brings light relief into this book, such as when one of the prisoners says: ‘I hope there’s not going to be any nonsense about allowing baseball on the rugger pitch… I hear the sports committee have been approached.’ To which another replies, ‘Baseball. Surely we haven’t sunk to that.’ There is also an amateur dramatics group within the POW camp, which is episodically viewed by the reader as they plan their next production. Yet as well as bringing light relief Gilbert also uses it to contribute towards the central mystery. Equally there are moments of understatement which are also entertaining such as when one prisoner when asked why he was visiting another hut after dark, (which is against orders), says that he’s ‘just gone over to make a fourth at bridge in Hut A.’

Overall I thought this was a really good read and the historical context gave the investigation a time factor which adds pressure and tension. It also makes you wonder whether in the end solving the mystery will actually matter and Gilbert’s method of resolving it is realistic and very much of real life, adding shades of moral complexity and ambiguity. I did not guess the solution myself but Goyles in his explanation of the crime goes over the clues which led him to the solution, clues which in fairness to Gilbert, are available to the reader. Although this is only my third Gilbert novel I think this shows him writing at his best. I would highly recommend this book as it has an interesting central puzzle, a brilliantly used setting and realistic and engaging characters.