This month the Tuesday Night Bloggers’ are steering away from the obvious theme of Christmas Mysteries and instead are looking at Foreign Mysteries – those which take place outside of the UK and the USA. These mysteries can be translated from other languages or can be written by non-natives to a country. Looking at my TBR pile (which isn’t doing too bad at the moment) I found I had quite a choice for this month’s theme, as I have a number of books which are set in non UK and USA settings. Therefore this month whilst it may be freezing outside, I am hoping to take you on a round the globe trip, (in reviews that is – so put your passport down), looking at mysteries set in places a little bit off the beaten track (in terms of their presence in mystery fiction). And as my post title suggests these places are all going to be warm – no Antarctic mysteries for us.

This is a mystery adventure novel rather than a detective novel and some film buffs may have seen the film adaptation of it released in 1953 starring Glenn Ford; keeping the same name as the book but is set in Mexico. This location change does somewhat ruin the significance of the title which refers to the plundering of Inca gold, as the Incas believed that they originated from the sun god Inti. The story is narrated by adventurer Al Colby, a young man whose personality comes through his actions and decisions, yet the reader is not really told any statistical data about him or why is he in South America.

The book begins in Santiago in Chile and Colby is approached by the elderly and invalid Alfredo Berrien with an unusual proposition: Go on a boat to Peru, a boat Berrien will also be on with his nurse, Ann Luz, and conceal upon his person a small package – the contents of which he is not to know. In exchange he will get $1000. A little further probing elicits that Berrien is an antique’s dealer and that inside the package is a Peruvian antique which he wants slipped past the Chilean authorities. If Colby gets caught he could be fined and even face a jail sentence. Yet it turns out as Colby embarks to Peru that this is the least of his problems…

His problems begin on the boat, with the conventional detective novel trope of Colby wondering whether the other travellers are really who they say they are, let alone those he is supposed to know anyways such as Berrien and Luz. Various suspicious circumstances such as secret radio messages and room searches culminate in a death – Berrien’s. Unsure who he can trust Colby, now in Lima, Peru, decides to open the package; the contents of which lead him on an adventure for long lost Inca gold. This adventure unsurprisingly though is pitted with many obstacles and dangers, as Colby is definitely playing with fire when he has to work against and work with people who are far from friendly towards him and are more than happy to give him a bullet in the back rather than a hand to help. Yet this is more than a Boy’s Own adventure and the issue of human slavery and freedom are themes which become more pervasive as the book continues.

This is not my usual sort of mystery novel as I tend to be drawn more towards detective novels than general mystery novels. Plunder of the Sun has a soft hard boiled style, which can be seen in the prioritised action focus and also in the staccato character descriptions such as when Berrien is said to have ‘looked ugly and soft and helpless, like a slug. His skin was corpse-grey.’ Although I don’t think this book advocates a one lone man against the world kind of view, as Colby often has to collaborate with others even if they are as slippery as eels. Furthermore when he does try to take control of events and also become a fairy godmother for some of the characters he becomes anxious about whether things will work out, thinking that ‘playing God isn’t a good thing, if you can’t deliver.’ Moreover at the end of the book when he plans to take on a “bad guy” some more he is actually pulled away from this action by another character who suggests that this decision is more fuelled by ego than moral superiority. 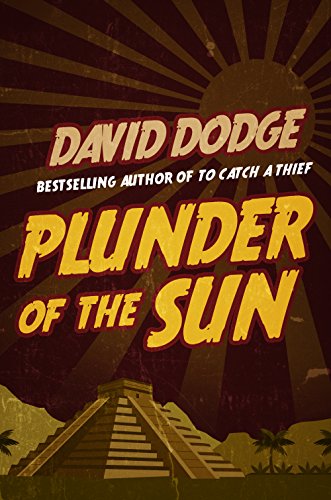 I think something which made it harder to identify and engage with Colby is the mystery which surrounds him, as we don’t really know what sort of life he is leading. I think he is an American, though he doesn’t readily identify with other Americans, such as when he tells the reader about how Americans on holidays can be seen ‘a mile off, wherever you meet them and whatever language they happen to be talking. There’s something in the way they carry themselves.’ With my linguistics hat on the use of the pronouns ‘them’ and ‘they’ gave me a sense of Colby trying to distance himself from them – though maybe he just isn’t a fan of American holiday makers. The only personal detail we get about Colby is that he was a radio operator for the American army during WW2. As to what job he has I am unsure, though from lines such as this: ‘Half the crooks I knew expected everybody else to be crooked, and the other half were smart enough to realise that honesty was useful – in somebody else,’ it seems he has morally ambiguous work.

In keeping with the mild hard boiled flavour of the book, women tend to be depicted as dangerous, even if they are only trying to be spiteful rather than participating in a criminal plot. However as the book progresses their threat becomes neutralised and characters who need Colby’s help, especially Luz. Ann Luz is a criatura, which means she is a bond child. The practice of criaturismo as described in the book is when poor families give their babies or children to a more well off family where they are looked after. It is seen as a form of unofficial slavery as such children may well be required to work for the family or have their futures dictated to by their patrons. This is the case for Luz, who although legally free, is mentally still enslaved to the family she was given to and head of this family is keen for her to marry his son, something she does not want to do, but feels she owes the family too much to refuse. It is this sense of obligation which Colby tries to fight against and her position at the end of the story is an interesting one. Moreover, the practice of criaturismo also becomes a spring board for looking generally at freedom and the desire for it in the story, such as when Colby says ‘to some people freedom is more important than all the treasures in the world.’

This book was also interesting for what it revealed about Chilean and Peruvian culture at the time, depicting the disparity in wealth and characters’ addictions to coca leaves (the raw material for cocaine). I also learnt a new word, ‘gringo’ which is used in Spanish speaking countries, especially in the Americas to describe someone, particularly an American who is neither a Latino nor Hispanic. Dodge doesn’t overwhelm the reader with cultural detail but gives the right amount so you feel you are in another time and place. It almost has a travelogue like feel at points such as when Colby talks about the effect of altitude on the body when taking a train ride into the mountains. Dodge is also good at giving the right amount of information about the Incas so that the treasure hunt makes sense and is interesting to follow. This meant I also learnt some things about Inca culture which I had not known before such as that the Incas did not have a written language but used coloured knotted string as memory aids for messengers, with the different colours and arrangement of knots transmitting different ideas. I also learnt that the Incan spoken language was Quechua.

So on the whole this was an alright mystery adventure novel though I don’t think it had a mystery you could really sink your teeth into. But the pace was good and there is plenty of action to keep your attention. I also enjoyed the setting and the information it revealed about living there.

So where are we off to next week? Well I was going to give a cryptic clue about the setting of next week’s book but for some bizarre reason when I try to google the place it doesn’t seem to exist. Always a good start right? However, I can guarantee that it is another warm destination so leave your duffle coats at home.