Taken at the Flood (1948) by Agatha Christie

This was a slightly unusual re-read for me, in that in picking up this book again I couldn’t remember anything about it – bit like reading a genuinely new Christie novel. My book specific amnesia came to my attention earlier this year when my fellow blogger, Brad at ahsweetmystery blog reviewed it, though it took until now for me to finally get around to reading it, with another recent post by Brad giving me the final nudge I needed.

Taken at the Flood (1948) begins with a brief prologue set in 1944 London where we and Poirot are privy to a club bore’s latest anecdote. A very rich man named Gordon Cloade has been killed in an air raid, having recently come back from America, bringing with him a much younger wife and her brother. His death has major recuperations for those close to him. For his wife this means lots of money, whilst for his relatives it means the snatching away of a security blanket, as his new marriage invalidated Cloade’s old will and he hadn’t had the chance to make a new one. This particular club bore also knows something of Cloade’s widow, Rosaline and her past. She had been married to one of his friends, Robert Underhay, in South Africa. Their marriage had not been successful and they agreed to separate. Rosaline wanted a divorce but Robert was not so keen, being a catholic. He told his friend he might fake his own death to give Rosaline her freedom and he himself would take on a new identity, Enoch Arden. When Rosaline made it back to England news of Robert’s death arrives. Did he carry out his plan or is his death genuine?

The narrative then skips ahead to 1946 and Cloade’s relations are struggling financially, some more desperately than others. Sponging on Rosaline is becoming quite a habit, especially when Rosaline’s brother is not around, but what if there was a way of proving that Robert Underhay was alive? A new arrival seems to suggest there might be. There is also a love triangle in the middle of all of this involving Lynn Marchmont, a newly demobbed wren, her long standing fiancé Rowley Cloade and David Hunter, Rosaline’s brother and what you might call an interloper into this group, who seems to be offering the danger and excitement Lynn is hankering after. Of course death soon appears on the scene, yet as Poirot frequently says in this case everything is not ‘the right shape.’

Well this book specific amnesia did not last long, only a few chapters, and what interested me was what sparked these very dormant memories off. It was the appearance of David Hunter in the story which did this for me and musing on this character I felt he was an anti-hero and an anti-hero with a very pivotal position in the story, which in itself made this story a less than usual Christie. He is an adventurer who like a leopard can’t change his spots, yet in terms of the crimes committed in this book it is unclear until the end how much and if he is involved in them. Furthermore, it is interesting as an anti-hero, he is one which can be unmanned and undone by his own feelings towards Lynn and there is some Darcy/Elizabeth Bennet verbal sparring between them. In some ways he is of more importance than his sister in the book, despite how key she is in terms of the money Cloade leaves. This is highlighted in the book’s title, which comes from one of Brutus’ speeches in Shakespeare’s Julius Caesar when he is extoling the necessity of opportunism and taking risks, a philosophy David also seems to advocate and follow. However, despite this link something which gave me temporary amnesia over this novel was that in my mind I hadn’t linked the plot I knew with this title name.

Something else I took from this re-read was what Christie might be saying about post-war Britain. Firstly such a Britain seems to be or rather is perceived by the characters as being ‘topsy-turvy,’ (a feeling which also comes across in the mystery element of the book and its’ solution). For example there have been shifts in gender roles as with Lynn and Rowley it was Lynn who left home and went abroad to serve in the war, whilst Rowley stayed at home as a farmer. There have also been social changes which have affected certain employment sectors such as domestic service and it has also changed who has the money. This latter change is seen in the rise of Rosaline Cloade and David Hunter who in contrast to the “socially respectable” and “genteel” other Cloades, are seen as coming from a lower and inferior class. For instance when Rowley sees Rosaline he thinks that she is ‘as a mannequin might display dresses that did not belong to her, but to the firm who employed her.’ Yet it Rosaline and David who hold the purse strings, whilst the other Cloades are struggling to make ends meet and/or are facing financial ruin and David revels in this change of positions, enjoying how he can hurt the Cloades, almost putting him in the place of the family tyrant. This latter role may seem incongruous with David as a person but it is in keeping with the upside down nature of the book. 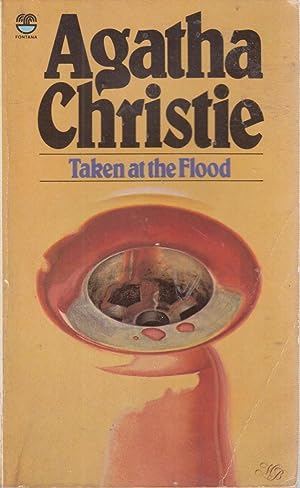 Another aspect of post-war Britain which this book brings up is the disillusionment of peace. Lynn herself says that the war has left ‘ill will. Ill feeling’ and she is definitely a character who has to come to terms with what reality is, in comparison to what she imagined life would be like after the war. I think there is also a sense of insularity, as various characters in contrast to the “Blitz Spirit” are more interested in looking after number one and making sure they get what they think they deserve (a need amplified by the fact that war induced hardships were still continuing such as rationing, plus increased taxation). I felt this came across in how some characters treated foreigners such as Poirot, as there is a resentment of his presence, with a feeling that he should have gone home – “after all wasn’t that why they fought in the first place?” This is something Poirot muses on himself and we are told that ‘he had already learnt that every single individual had a different version of the theme ‘What did we fight the war for?’ For some this answers leads to some racism, whilst for others the answer is one of wanting things to be like how they were before the war.

Change is definitely something which Christie aligns with post-war Britain, which Rowley exemplifies when he says that ‘the war’s broken up everything and shifted people round.’ Yet this theme isn’t left in this simple state. For instance there are characters such as David who are trying to force this displacement such as when he tries to convince Lynn to leave her home, saying that ‘you’ve got roots here, roots that hold you down. I’ve got to pull you up by the roots.’ In contrast though there is Poirot who stands alone in thinking that despite all of these outward changes, human nature and humans do not change, a point he proves very effectively with Lynn. 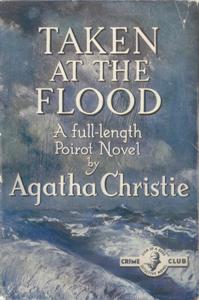 Although David hogs the spotlight in some respects I was quite engaged by Lynn and her love/hate relationship with her mother and her more independent thinking makes her a character you can warm to and identify with. Her romantic tangles are also interesting as she works her way through what is real and what she imagines to be so. I think the only thing which troubles me with her romantic adventures is their ending, an ending which seems to advocate male violence as firstly a proof of devotion and secondly as an attractive quality? I wouldn’t have felt this was something Christie would want to promote, so I am unsure as to its purpose in this book. Is it a symptom of new post-war world? Any thought do let me know. It isn’t just me who was perturbed by this as the Puzzle Doctor on his blog had a similar issue. 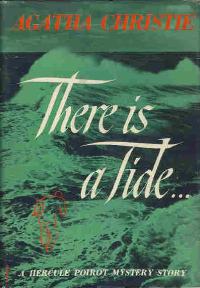 However, for me a female character which surprised me and I felt was underused in the book was Frances who is married Jeremy Cloade. When you first me her and her husband they seem like the typical or rather stereotypical British married couple, who keep a stiff upper lip when their son dies in the war and who are uber-respectable. Frances herself initially comes across as a village busy body who becomes ‘more efficient, more energetic than ever’ after her son dies. Yet even this initial portrayal hints not all is as it seems, as this increased activity is coming from a place of grief and loss. Moreover, we get to find out about her more unconventional childhood and background, revealing that she is not your conventional genteel country solicitor’s wife. What I liked about this couple is that when Jeremy has to reveal how bad their finances are, their genuine and deep love for each other comes through, they aren’t dry and cold as you might expect them to be. So in some ways they an unlikely couple in a Christie novel to be classed as romantic, yet just as in Death on the Nile (1937), this love can lead to ill-conceived and dangerous things. A couple of other things which stood out for me in story were firstly the different nature of the solution revealing scene. Normally Poirot gathers all the suspects and involved characters together, a gathering which is usually quite big. Yet in this one there are only three other people besides Poirot and not one of them is a policeman. I’m still musing over what this difference might denote, as I am not entirely convinced it is symptom of the post-war Britain, as later Christie novels return to the large gatherings of the pre-war mysteries. The other thing which grabbed my attention was the club bore ironically, Major Porter, as he rather reminded me of Major Palgrave from A Caribbean Mystery (1964), who equally enjoys telling people long winded anecdotes. However, I think Porter has a more unsettling and active role in this book than Palgrave’s more passive and prosaic one in A Caribbean Mystery.

So suffice to say there is definitely a high amount of ill easiness in this story and post-war opportunism is certainly given a sinister edge. Yet the question I ended up asking myself at the end of the book is whether the large topsy-turvy nature of things makes for a satisfying story? The solution to this story was a good one, with some enjoyable twists and retrospectively you can see the duplicity of some of Christie’s dialogue. Nevertheless there is a but to this sentiment, which is that despite the solution being a clever one, it still had a feeling of being whipped out of a hat. Perhaps the problem with this book is not the build-up towards the deaths, nor the solution itself, but is with Poirot’s investigation. For me something just didn’t feel quite right there.

Classic Mysteries – From the Vault – “Taken at the Flood”

Mysteries in Paradise – Review: Taken at the Flood