Today is John Dickson Carr’s 110th birthday and JJ at The Invisible Event, who has a passing interest (and by that we read fanatical devotion) in Carr, decided to commemorate the occasion by exhorting fellow bloggers to contribute posts about the man and his work, which he is going to gather up into a summing-up post later today, as well as contributing his own pearls of wisdom. Not being quite so keen on Carr as JJ is (but then who is?), it has been a while since I last read any of his work, though if I had to pick my favourite three reads off the top of my head I would go for The Case of the Constant Suicides (1941), The Emperor’s Snuffbox (1942) and The Judas Window (1938).

The Nine Wrong Answers (1952) begins in New York when Bill Dawson, who is definitely worse for wear and on his uppers, is given the chance of a life time by Larry Hurst. Larry has signed certain documentation which mean that if he wants to be his rich uncle’s heir he has to move back to England straight away and visit his uncle once a week for the next 6 months. The deal is further sweetened by $10,000 in cash. So what’s the catch? Well it seems that Larry’s uncle, Gaylord Hurst, was a figure of terror in his youth, continually frightening him and messing with him psychologically, to the extent that Larry ran away to sea at 16 and hasn’t been back to England in 18 years. Suffice to say the money sounds great but the thought of having to face his uncle is more than he can bear. But his fiancée, Joy Tennent, who you could say is a “practical” person, ultimately pressures him into agreeing. Yet when Larry happens to see Bill a plan formulates in his mind (which Joy is less than pleased about) and he approaches Bill with the following proposal: Bill is to impersonate Larry for the 6 months in exchange for the $10,000. Again so what’s the catch? Larry thinks there is a definite chance his uncle wants to kill him. Envisaging the things he could do with the money, Bill agrees.

Although our suspicions are aroused by a lot of this, the events in the main seem quite straight forward. Yet this is Carr so the plot from this point onwards reshapes the known facts in a consistent fashion, like a kaleidoscope, with many a good twist and surprise, such as Larry being poisoned shortly after organising the subterfuge with Bill, who decides to continue with the plan in order to avenge Larry. There is also Bill’s fortuitous meeting with his old flame, Marjorie Blair and there is the duplicitous Joy Tennent and her mysterious role in events to unravel. When the characters arrives in England the twists and surprises are only just beginning, which I’ll leave unmentioned. Events take a cat and mouse nature, though being Carr, the challenge is to figure out who’s the cat and who’s the mouse. It remains to be seen whether Bill will win and gain the upper hand or whether he will fall prey to the very trap he was trying to avoid…

I didn’t have as much time for reading last week, but the couple of books I read were a bit thin in terms of their puzzle aspect. This is certainly not a criticism which can be levelled at this book and a reader needs to keep their wits about them when reading it. From the beginning there is an immediate sense of uneasiness and lack of trustfulness in what the characters are saying. Added to this Carr, a bit like Gaylord in the book, plays with the readers’ minds with his nine footnotes, which outline a surmise the reader might have just thought based on the narrative, to then indicate that it is wrong. Now this might just seem like Carr being unusually fair and helpful, but be warned! They are far sneakier than you realise. In the main I have never really warmed to either Dr Fell or Sir Henry Merrivale, Carr’s two main serial sleuths, so it is to this book’s advantage that neither appear in it. Consequently because none of these two large personalities are in the book, Carr’s characterisation skills can come to the fore and have a freer hand, creating a complex and engaging set of characters. This complexity comes through in the psychological battles Bill faces with different characters and it is this character complexity, that at times causes some ambiguity and uncertainty on the part of the reader, which also further obfuscates the story’s central mystery. 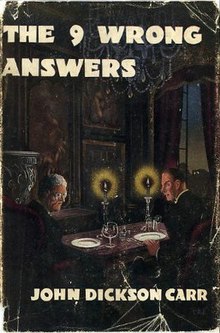 Carr is certainly a master of suspense and an expert in throwing a plethora of twists and changes at the reader, without losing control of his plot. I think one thing which I was a little disappointed in when reading this book is that two locations, the BBC studios and the Sherlock Holmes rooms in Baker Street, which the blurb mentions in the book aren’t really used to a great extent. Consequently despite the interest and intrigue they generate, especially the last location, I don’t think they really added much to the plot and felt a bit unnecessary and underused. The solution is a satisfying and clever one and I was pleased that I got one bit right. However, I felt that the delivery of the solution is a bit too fast, considering the complexity of it and it might have been better if it had been given at a slower pace to the reader. This issue combined with the issue over the two locations I mentioned above, meant the ending for me was a bit underwhelming and didn’t match the rest of the book’s suspense and excitement. Nevertheless this was an enjoyable and refreshing read, which I definitely needed.