A couple of weeks ago I did a post for Remembrance Sunday which looked at First World War set mystery novels and a lot of interesting ideas and recommendations were brought up – so thanks for that! For the Tuesday Night Bloggers this week I am returning to the theme of war, as this is arguably one of the biggest factors which shapes history. War as a setting can be useful to writers as it provides plenty of opportunities for action and pathos. It also ties in well with espionage or spy novels as a war gives a spy a plausible context to be working in. Furthermore, due to the damage war causes, novels which involve a war can often be retrospective, looking back on unexplained mysteries or traumas. Social history can also be found in such novels, revealing details of what it is like to live during a war either on the battlefields or on the home front. So a bit like last week I thought I would share some of my favourite mystery novels within which war (including the lead up to, duration and the aftermath) is involved.

Firstly if you are going to read these novels, read them in this order, unlike me who read them the other way round. Can’t say anymore without giving spoilers, so you’ll just have to trust me. The first novel is set during WW1, whilst the latter one is set in the run up to WW2. Manning Coles was actually the penname for two people called Adelaide Frances Oke Manning and Cyril Henry Coles, the latter of whom actually worked in British

Intelligence. Normally espionage or spy stories are not really my thing, yet Manning Coles gives us much more than a conventional spy plot. The story feels fresh and not hampered with tropes, which is probably down to the choice of narrative perspective Coles uses and the characters they decide to focus. For readers who love character driven books, then these two would be ideal and it is this characterisation which makes the ending of Drink to Yesterday so wonderfully sad and poignant.

This is a mystery which looks back to WW2 retrospectively and there are many characters who are struggling to move on, especially the protagonist Victoria, who is desperate to found out what happened to the man she loved. Moreover, it is when she tries to meet somebody from her WW2 past that events lead to her being falsely arrested for murder. War experience in this novel is focused on those who were in France either as British soldiers or as French inhabitants and the difficulties that arose. This is very well told courtroom drama, with a great deal of humour.

Again this is another WW2 themed novel, but this one is set on the American home front and this is definitely a novel which is rich in social history. Moreover, it is not just a case of depicting certain details. Taylor also has these details filtered through the protagonist Asey Mayo, who has come home on leave and is surprised by the changes war has wrought on his home town. With a strong prose style and on the whole enjoyable characterisation, this would be a good place for readers new to Taylor to start.

The home front is once more the setting, but in this case Rutland sets her novel on British soil. Out of the three mystery novels she wrote this is her best in my opinion, closely focusing on one family and their lodger, Arnold Smith, who makes for a good fly on the wall to this dysfunctional family. This is also Rutland’s darkest novel, (giving it a decidedly Frances Iles flavour), which comes across in the character psychology, the narrative’s humour and the book’s powerful ending, which certainly left me gasping. Again a great deal of social history can be gleamed from this book as Rutland touches on the role of woman in the war, as well as British and German attitudes towards Jewish people.

Whilst I loved the Coles novels for their human intrigue and emotional impact, I think my reasons for enjoying this spy novel is because of its humour and the fact it has one of my favourite sleuthing pairs in it: Tommy and Tuppence Beresford. Though a lighter hearted spy novel, the war context does make the boarding house setting more sinister, as the Beresfords try to uncover who the fifth columnists are. 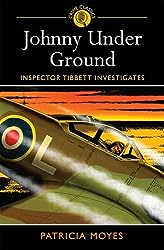 Like Gilbert’s novel this is a book which looks back to WW2 retrospectively and the present action of the book revolves around suspicious circumstances which took place during the war at an Airbase. This is probably my favourite Moyes read to date. Not only is there a strong central mystery to be solved, but I likes how Tibbett’s wife is more involved in the case, making it a more personal investigation for him.

7. The Message of the Mute Dog (1942) by Charlotte Murray Russell

Back to the American home front, Russell’s humorous amateur sleuth, Jane Amanda Edwards, has to tackle murder and Nazi spies when a local defense plant is attacked by an arsonist. Though my memories are a little dim on this one, I do remember enjoying it. The setting and the mystery felt quite fresh and original. Although dubbed as a ‘cosy mystery,’ I think the action of the plot and the active nature of Edwards prevents this becoming twee or quaint.

In the ten novels which have been translated from Akunin’s Erast Fandorin series, this surprisingly is the only one which really involves a war. I found this surprising when writing this post as the Fandorin novels traverse a number of decades (1870s to early 20th century), decades which were quite filled with violence and war. Unlike the other novels in this list, this book is set in Bulgaria during the Russo-Turkish War (1877-1878). Akunin’s uses historical events well, fitting them into the narrative of his story, a narrative which is subtitled as an espionage mystery. War and espionage mysteries seem to go hand in hand really, looking back at my list, which seems logical given the active nature of war. Nevertheless Fandorin does not lose his analytical side and when he reveals what has been going on at the end, his solution is rational and supported by clues.

I’ve never been a big fan of Allingham’s work, but this is probably my favourite one which like Gilbert and Moyes’ novels, looks back to World War Two. Meg, the female protagonist, believes herself to be a war widow and has subsequently got engaged. Yet mysterious messages sent to her seem to be suggesting that her first husband is still alive and it is from this point the novel’s action unfolds. I think this novel highlights one of the reasons why writers might want to look back to a war in their mystery fiction, as war leads to many unresolved mysteries such as loved ones being missing in action or bodies not always being correctly identified due to the state they are in. This leaves the people left alive in a difficult position, as it can be hard to move on with your life if you don’t know whether someone close to you is dead or not. So not only does war setting lend itself to creating a plausible setup for a mystery novel, but it can also add emotional depth and poignancy.