Invariably late to the party as usual, I have finally got round to reading one of the British Library Crime Classics short story collections. There were a few familiar stories in the collection but also a number of new ones. The collection opens with an old but good

classic, ‘The Blue Carbuncle’ by Doyle, which I liked for its’ Dickensian Christmas feel, as Holmes has to unravel the mystery behind a ‘disreputable hard felt hat’ and a goose with surprise. Ralph Plummer wrote the second story in the collection, ‘Parlour Tricks,’ which until this reprint had only appeared in a 1930’s Christmas Holiday annual. Plummer was a new author to me and this particular story focuses on a group of hotel guests who are entertaining each other with magic tricks. Yet it seems someone has a different agenda for the evening’s entertainment. I liked the twist used in the story but think its’ effectiveness was constrained by the rushed ending. Any chess fans reading this post will be pleased with the focus of the collection’s third story, ‘A Happy Solution’ by Raymond Allen, a Welsh Barrister who was a big chess enthusiast. As with the previous two stories this one is concerned with a robbery, or at least an attempted one, of a £1000 charitable donation. The guilty party is probably quite easy to identify though I think only those with a good understanding of chess will be able to explain the ‘how’ of the nearly successful crime. Thankfully for people like me the collection has a solutions section at the end of the book where it is more fully elaborated.

‘The Flying Stars’ by G K Chesterton is the next story in the collection and is another classic Christmas mystery story. The story centres on a jewel theft during a country house pantomime, with the expected confusion created by everyone being in costume. Like Doyle’s ‘The Blue Carbuncle’ there is a moral flavour to the piece’s ending, with Father Brown persuading the thief to turn their back on their life of crime, emphasising the downward spiral it often leads to and how freeing yourself from society’s laws is not as freeing as it seems. The fifth story in the collection was a new one for me, enigmatically entitled ‘Stuffing’ and was written by that prolific writer, Edgar Wallace. This is another theft story, with a beautifully constructed twist and considering how short the story is, I felt Wallace set up and interlaced three groups of characters very effectively, leading to a clever ending. Although familiar with the writer H. C. Bailey, I have not read much of his work. Unusually Bailey’s serial character, Reggie Fortune, began life in short stories before appearing in novel form. In this story, ‘The Unknown Murderer,’ Fortune encounters a series of deaths, such as a medical officer at an orphanage having her throat cut and a child being poisoned with arsenic. Due to the nature of the crimes the story has quite a dark atmosphere and Fortune is understandably upset by them. If this was a longer story I think it would have been better as unfortunately I think the final section was too rushed and abrupt, meaning the solution isn’t as convincing as it should be.

I have read a number of novels by J Jefferson Farjeon, but I think this story, ‘The Absconding Treasurer,’ is the first short story I have read by him. This is one of 57 short stories which Farjeon wrote between 1925 and 1927 which featured his character Detective X Crooks. In this story Crooks has to solve the disappearance of a club’s money and its’ treasurer. I found the story quite enjoyable and Farjeon plays around with assumptions and prejudices quite well. The eighth story collection, ‘The Necklace of Pearls’ by Dorothy L. Sayers, returns to the theme of a jewellery theft, which happens at country house Christmas party. Thankfully Lord Peter Wimsey is one of the guests so the thief is doomed to failure. I particularly liked the choice of hiding place the thief uses in the story. I also came across a game called clumps, which I hadn’t heard of before and sounded quite amusing. If my googling has been correct the aim of this game is when someone calls out a number, the players have to get into a group of that size. Anyone who cannot form such a group loses. Any one played it? Little puzzled how such a game can end. Moving on though to the next story in the book, with another familiar face, Albert Campion, in Margery Allingham’s ‘The Case is Altered.’ Another country house Christmas party with suspicious notes and parcels and another theft thwarted by the able amateur sleuth.

Allingham’s story was followed by one which I had read before – Ethel Lina White’s ‘Waxworks,’ which is one of my favourites. It takes place in a waxworks museum after dark, a museum where there have been a number of deaths; one where someone got their throat cuts, whilst a further two died supposedly of heart failure. Intrigued rather than deterred by this, Sonia, a news reporter is determined to spend the night there to record what happens. As the story progresses we find out more about her work and her colleagues. Fuelled with murder theories and office animosity, Sonia’s vigil becomes far more sinister and it appears she has unwittingly entered a game of cat and mouse. Yet with White nothing is as it seems and she maintains the suspense and mystery well. A sinister atmosphere continues in the next story in the collection, ‘Cambric Tea’ by Marjorie Bowen, when a doctor seems to get more than he bargains for when he takes on a new patient. I really liked this story, though I found the ending fell a bit flat, which was disappointing considering how strong a setup Bowen creates. Bowen, though is the only writer to appear twice in this collection, under the second penname of Joseph Shearing. Both Bowen and Shearing were some of the pennames of Margaret Vere Long. In her second story, ‘The Chinese Apple,’ we have our protagonist Isabelle Crosland returning to England, after living for many years in Italy and who is expecting to meet her orphaned niece for the first time at her old family home. This brings up many old and painful memories and Isabelle is also surprised by the niece she finds. Things are not what they seem though and I think this would have been a better story if the central twist was not so easy to guess.

The next story in the collection, ‘A Problem in White,’ is by Nicholas Blake, whose novels I am more familiar with. The story takes place on a snowbound train in the North of England and focuses on one particular train compartment of passengers who are eager to discuss the train robbery which occurred the previous month. Yet there is more than one character with something hide and it is not surprising when the night ends in murder. This story has the cleverest mystery/puzzle out of all the ones in this collection and I think it has all the makings of being a Christmas mystery story classic. Puzzle fans will particularly like this story as it includes something akin to a challenge to the reader. I didn’t manage to solve the case but in the solution at the end of the collection the clues are all definitely there in the story. I also liked how Blake introduces his characters with descriptors such as ‘deep chap,’ and ‘expansive man’ first, before giving their real names.

The penultimate story in the collection, is Edmund Crispin’s ‘The Name on the Window,’ and features Crispin’s serial amateur sleuth, Gervase Fen. Fen is called on by a Scotland Yard friend who is in need of advice over a murder case he is investigating. The case in question involves a country house party at a residence which has a violent past, with someone having been killed in the pavilion. A ghost is said to haunt it as a consequence. The owner though is not convinced and plans to hold a vigil in the pavilion. Yet he is later found dying in the pavilion, murdered. Though before he dies he is able to say a few cryptic words and points to the name he wrote in the window pane. Although this name should give the police a helping hand, the police are hampered by the fact they can’t explain how the killer got in and out of the pavilion. Thankfully Fen is able to elucidate matters.

The final story in the collection is Leo Bruce’s ‘Beef for Christmas,’ which features his serial character, Sergeant Beef, who is now retired from the force and has set up as a private detective. Beef calls on his friend and our story’s narrator, Lionel Townsend, to go with him to a millionaire’s Christmas gathering. The millionaire in question is receiving threatening letters from one of his relatives who writes they will kill him if he does not stop spending so much money. It is Beef’s job to find out who the letter writer is. This is a case with a number of surprises though and Beef is quite enigmatic until he reveals the solution at the end.

So all in all a quite an enjoyable collection of stories. I think my favourites were Wallace’s ‘Stuffing,’ Bowen’s ‘Cambrics,’ ‘White’s ‘Waxworks’ and ‘A Problem in White by Nicholas Blake. These came across as more complete than others, having a sense of depth in their plots and characters and on the whole ending well. I am interested to see which stories have been chosen for Crimson Snow: Winter Mysteries, this years’ Christmas mystery stories collection by the British Library. 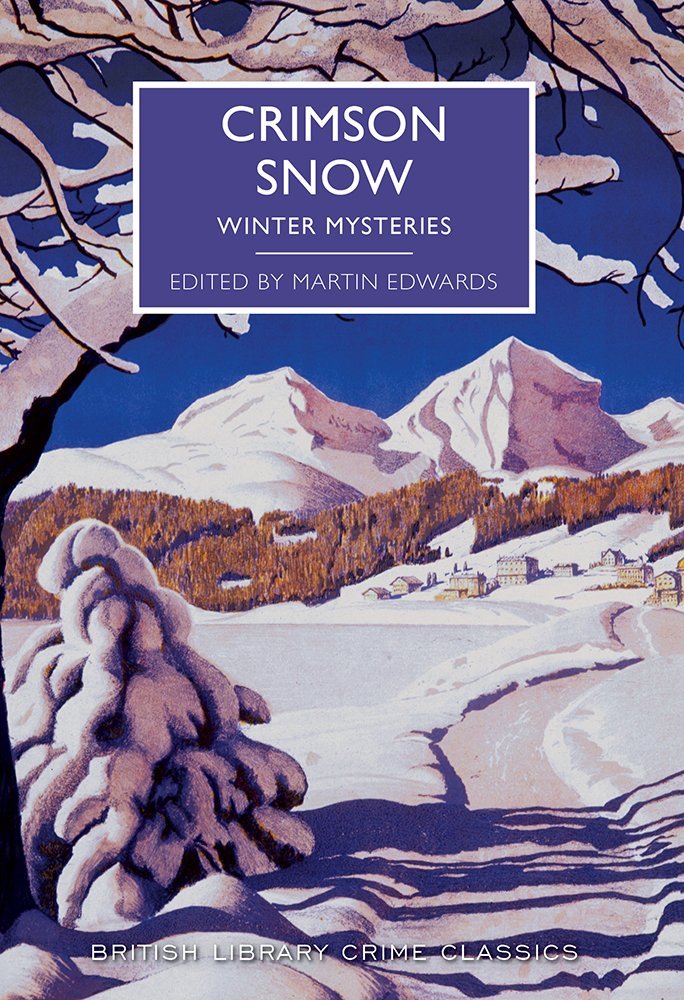