The Mystery of The Three Orchids (1942) by Augusto De Angelis

I first read this author’s work earlier this year when I reviewed The Hotel of the Three Roses (1936) which I enjoyed for its’ central sleuth, narrative style and the way it built up tension. The Mystery of the Three Orchids (1942) is the third novel by Angelis to be reprinted by Pushkin Vertigo and Angelis was an Italian crime writer who published 20 novels, featuring his series’ sleuth Inspector De Vincenzi, between 1935 and 1943. Angelis thought ‘the detective novel is the fruit – the red, bloodied fruit of our age’ and in a way this is perhaps shown in the motivations behind the crimes which take place, oscillating around greedy desires. The Pushkin Vertigo edition also says that Angelis ‘saw in… [detective fiction’s] unifying popularity a potential catalyst for revolutionary change.’ I found this an intriguing statement and it made me wonder how this is reflected in his work. Based on the two novels I have read I can’t really see it, but perhaps I am not looking for the right things. Angelis was a Marxist living in a Fascism ruled Italy and his fiction was often censored by the authorities. He was arrested in 1943 and imprisoned for 3 months for writing anti-Fascist material. Soon after his release though he died from being beat up by a fascist supporter in 1944.

The book revolves around Cristiana O’Brian’s fashion house and opens with a tantalising preface. Fifty invites have been sent for a fashion show of O’Brian’s latest collections. Yet fifty two guests appear. Two bodies are mentioned, one of which is found on O’Brien’s bed. What sets this crime spree in motion is the early release of a certain prisoner from the Kansas City Penitentiary. Within a mere paragraph I was hooked, wanting to know what all the hints and enigmatic remarks pertained to.

The novel proper opens with O’Brien having the shock of her life. She came to Italy to escape her past, yet in the audience of her fashion show is someone who is very likely to bring it all back to her. Inconsolable she rushes to her bedroom and finds the first corpse, her ‘loyal drudge’ who has been strangled. By the body is an orchid, a sight which fills O’Brien with more terror than the body. Inspector De Vincenzi is inevitably called in and the claustrophobic nature of the setting, maintains the tense atmosphere as does another corpse accompanied by an orchid, a murder having taken place under Vincenzi’s very nose. This time a witness who probably knew too much. The cast of suspects are full of secrets they want kept hidden, especially O’Brien, who fulfils an ambiguous role. As more orchids are found and further deaths predicted, Vincenzi wonders how he can catch the killer, ultimately deciding on a trap… ‘So he wasn’t playing fair and square? Well, neither was the murderer?’

In short this was another excellent read by Angelis, who once more shows himself an effective writer when it comes to propagating tension and hooking his readers in with tantalising remarks. For example when the first body is found two comments are made about the identity of the victim, narrowing down the field, yet not revealing the name until the last moment before the police arrive. The tense atmosphere is also used to mislead the reader, setting them up to think one thing, only to reveal a sentence later something completely different, a skill which can be found in the opening line of the first chapter. So there is action, suspense and intrigue from the very beginning. 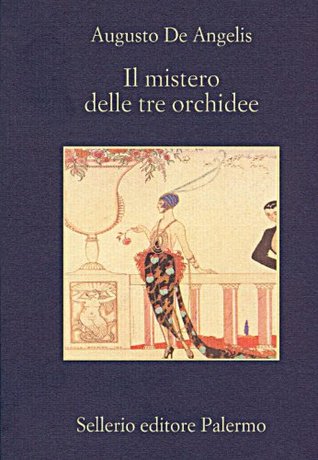 Characterisation is an important part of any fiction read for me, as regular readers of this blog have probably twigged and again Angelis excels in this category. One of the most interesting characters is O’Brien who can initially be seen in a sympathetic light but who soon reveals a much more negative and heartless side, which is evinced in her attitude to the first corpse saying they were ‘nothing to me. He didn’t mean anything to anyone. He was my personal secretary, having been my waiter and then my errand boy. He belonged to me, belonged to the O’Brien Fashion House’ and Inspector De Vincenzi replies to this that the victim ‘belonged to’ her ‘like an object, or a cute pet.’ The objection of the male in fiction is arguably less frequent than that of women (though maybe it depends on what you read of course), but the way this victim is objectified did stand out for me. Not least because in contrast to the subsequent female victim, the first corpse is gazed at and commented on much more. Conversely the second victim is soon covered up to prevent them becoming a spectacle. However, as the investigation progresses more is uncovered about the first victim, which shows they were an object that had no intention of staying that way.

The Inspector himself is another interesting character and I think this second book has helped me to find out more about him as a person, though his personal life is not significantly mentioned (the short time span of these novels probably contribute to this). Like Annie Haynes’ Inspector Stoddart, Inspector de Vincenzi has a more cynical attitude towards women believing that ‘lying and distraction come easily to… [them] their deviousness is automatic.’ Additionally this story emphasised to me how the Inspector is not considered a typical police detective by other characters (finding such ‘novelty… dangerous’) and that he doesn’t entirely fit into the system he upholds:

‘After he’d given his orders he was stuck by the feeling he always had in these cases: it was his absolute duty to set the official machine of justice in motion – with all its rules and procedures, red tape and useful scientific techniques. Yet he couldn’t help but think how powerless that machine was to unveil the perpetrator of the crimes, given that the killer had to be present, visible and recognisable, and only someone who knew how to read the murderer’s soul could unmask them.’

This quote in particular made me consider how the role of the detective is being presented, as what sort of person do you have to be to ‘read a murderer’s soul’ correctly, without being a killer yourself? It rather reminded me of a passage from G. K. Chesterton’s ‘The Secret of Father Brown’ (1927) where Father Brown explains how he solved some murders:

“You see, it was I who killed all those people.”

“What?” repeated the other, in a small voice out of a vast silence.

“You see, I had murdered them all myself,” explained Father Brown patiently. “So, of course, I knew how it was done.”

“I had planned out each of the crimes very carefully,” went on Father Brown, “I had thought out exactly how a thing like that could be done, and in what style or state of mind a man could really do it. And when I was quite sure that I felt exactly like the murderer myself, of course I knew who he was.”

In terms of the investigation I think the Inspector prefers to rely on psychological clues. Physical clues are involved in the case to an extent, though they should be treated with caution. I didn’t guess the killer, but I felt it was a good choice, as the narrative didn’t make you look in that direction. I think something I would have liked to have seen used more in the narrative, especially given Angelis’ strength in creating tension, is the ‘museum of horrors,’ otherwise known as the closet where the client’s mannequins are kept. A sinister place which I felt could have been made more of. So all in all this has been another success by Angelis and I look forward to trying more of his stories.