My 300th Post: Top 10 Posts of the year so far and Childhood Mystery Fiction

I can’t believe it’s that time again already with another 100 posts completed. To commence my 300th post I decided to see what my Top 10 Posts of the year so far were. Some of these I predicted, though there was definitely one or two which surprised me. Here were the results:

Moving on to my post’s second topic: mystery fiction of my childhood, which has been a topic I have been ruminating on recently. Unlike many of my fellow bloggers, I don’t have any childhood memories of reading a tattered copy of an Agatha Christie novel, which led to me becoming a crime fiction fan. And this is not because I am suffering from amnesia, but that I didn’t start reading Christie until I was at university, when I also first read the Sherlock Holmes stories. My reading history before this was mixed, beginning heavily with non-fiction (history in particular), before moving into historical fiction and it was when I was looking back at this last genre that I realised that a number of these books, some of which were favourites, definitely had a strong mystery element. So I thought I’d share some of these with you. It would be interesting to see whether anyone else has read any of these and also what other people’s favourite childhood mystery stories were. This short list is not the entirety of the historical mystery fiction I read when I was younger, but these are the titles which have stuck in my mind the most:

The four titles in this series were The Ruby in the Smoke (1985), The Shadow in the North (1986), The Tiger in the Well (1990) and The Tin Princess (1994) and they take place during the mid-late Victorian period. The central protagonist (though less so in the final book) is Sally Lockhart and I liked her dynamic and active approach to life and this is not a series which shies away from painful life events. She is not a professional sleuth, but she does end up unravelling a number of mysteries which come very close to home involving varying family members.

author involved and the fact that I didn’t notice much of a difference in style between books suggests that they did a pretty good job at maintaining continuity. These mysteries are set in Elizabethan times with our amateur sleuth being one of Elizabeth I’s maids of honours. She takes on a range of challenging mysteries sometimes off her own bat, and other times at the behest of the queen herself. To help her solve the various mysteries are her friends, Ellie Bunting the laundry maid and Masou al-Ahmed a tumbler. The titles of the book were working their way through the alphabet (e.g. Assassin, Betrayal etc.) but seems to have stopped at Loot (2010). 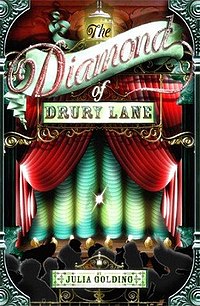 There are seven books in this series which is set mostly in 18th century England, ( though sometimes gets as far as France and Jamaica), and begins in Drury Lane. Not all of the books in this series are conventional mysteries and many fall more into the adventure category, The first book, The Diamond of Drury Lane (2006), is the most mystery orientated involving the disappearance of a diamond. I really enjoyed Golding’s gripping, entertaining and humorous narrative style and you do get very easily attached to her characters.

I have only read the first two books in this seven book long series, having read Framed

(2005) and Lost Bullet (2005). I don’t tend to enjoy futuristically set novels but this is one of the exceptions. In this alternate England, children go to live in residential schools, rather than be looked after by parents. In such schools they are trained for a certain form of employment and they are also paired with a partner for life. This causes a lot of strife for our protagonist Luke Harding, a forensic investigator, who wants to be with a musician rather than a biologist. Aside from this relationship problem the reader follows Harding as he takes on his first cases at the tender age of 16, cases within which he is sometimes suspected himself.

I may not be a fan of hardboiled or private eye adult crime fiction but I certainly found this private eye novel amusing when I was younger. I should point out that the book is set in the world of insects, with Bug Muldoon being a beetle who is also a private investigator. Shipton’s humorous style definitely appealed to me and this is not a story to take too seriously. Although I do think Shipton’s makes the insect world a convincing and plausible one.